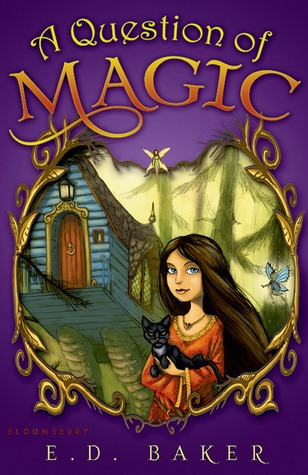 Serafina was living the normal life of a village girl, when she gets a mysterious letter--her first letter ever, in fact--from a great aunt she's never heard of in another village. Little does 'Fina know, her great aunt is actually a Baba Yaga, a magical witch who lives in an even more magical cottage.

Summoned to the cottage, Serafina's life takes an amazing turn as she finds herself becoming the new Baba Yaga. But leaving behind home and the boy she loves isn't easy, and as Serafina grows into her new and magical role answering the first question any stranger might ask her with the truth, she also learns about the person she's meant to be, and that telling the future doesn't always mean knowing the right answers.

In her inimitable and bestselling way, ED Baker has crafted a funny and romantic story that combines some fabulous details from the original Slavic tale, with an all new spin!

I confess I haven't read any of E.D. Baker's books previously, so I went into A Question of Magic without expectations. The idea of taking the story of Baba Yaga and turning it into a full length story was an intriguing idea. Serafina has a quaint and sweet life for the most part, when her great aunt calls her to claim her inheritance. She gets stuck with her brother in law Vicktor to travel with, when she would rather be with the dashing love of her life.

So when she approaches her great aunt's cottage, with bones as a fence and only a cat inside, he bails on her, leaving her to her fate as the new Baba Yaga. Serafina soon finds a variety of villagers visting her, she can answer their first question truthfully but sometimes that is not enough. She finds that the cat and the house will protect her in these situations.

Her real trouble begins when she finds that she is aging with each question. Serafina finds a special tea within the house that reverses the aging, but when attacked by vagabonds, the house forces them out and in turn, things break, including the jar holding the tea. Without it, she can never return to her normal life. But her life isn't that bad, helping others, making a friend in a young girl and getting to know the talking skulls and cat in her house.

I really enjoyed this story, although it was a bit bothersome at first that she was already in love, as it takes away a bit of the magic of a fairy tale. It played into the story, so I become less perturbed by the relationship. In fact, it is necessary to the ending of the book, which wraps up everything neatly such as a fairy tale often does. The story of Baba Yaga really set apart this book and was a new flair as a fairy tale with a happily ever after ending.

Final Verdict: A Question of Magic is an interesting retelling of Baba Yaga, that toes the line of fairy tales and although it didn't blow me away, it was a good read.