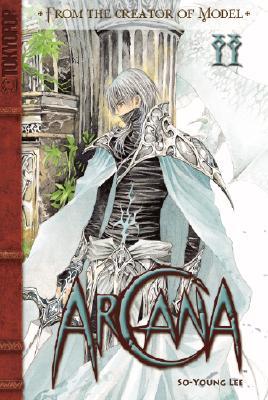 After Inez and Yulan leave the cradle of civilization, they enter uncharted territory, where they meet many strange and beautiful creatures: Mong, a cute, harmless Nyama with boundless curiosity; Kyrette, a mysterious figure that Inez finds strangely alluring; and a half-elf named Ariel, who has been gravely wounded...Inez discovers that she possesses a great gift--she can communicate with both the Nyamas and the elfs alike. But the more she speaks with Ariel, the more she realizes that he may be in terrible danger!

I'm starting to fall more in love with this manga series. Inez is a lovable character who has naivity but is starting to smarten up, just a little bit. I love the cute little Nyama creatures that pop up in the first part of the graphic novel. Missing her dog, Inez convinces one to come along with them to the land of Elves and names it Mong, the only word the Nyama says.

Kryette is a dark haired man who has been following Inez and Yulan and soon falls into their company, whether they want him to or not. His job is to find out more about Inez and the Dragon bloodstone she carries. Unfortunately, he already thinks she is a boy and is no closer to finding out more about her.

A new character and plot is introduced, a half Elf named Ariel who seems to have been almost killed over a female elf who is not allowed to be with a half-elf. I can't wait to see where this plot goes after they save Inez and Kryette from strange creatures. These creatures collect things under the realm of the elves and now they've decided to collect humans. Yulan must negiotate to save them and move on their quest, but is willing to pay the price of blood?

Final Verdict: A great installment in this series, full of action and intrigue that makes me want to read on. Here's hoping volume 3 is as good!