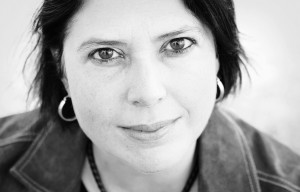 Today I have with me Jo Treggiari, author of Ashes, Ashes, which I had reviewed previously here.

In Her Own Words

I was born in damp and rainy London, England but like a sunflower I always turned towards my Italian heritage, and the small mountaintop village of my grandparents and the hot smells of wild fennel, fresh pasta, ripe figs and dusty, sun-baked earth. There is no place on earth I love as well. Rocca Sinibalda- doesn’t it sound romantic?!

After flipping between England, Italy and Ontario, Canada, (my parents are teachers), we moved to California. I majored in Creative Writing and European Literature at college. I always wrote but I ended up dropping out and spending the next ten years punking around, flirting with disaster, falling into a job with a record distributor, and eventually owning my own indie record label. We began with gangsta rap, and then expanded into alt rock, punk and electronica. The music business was fun back then. I had an expense account, a beeper and fancied myself the Harvey Weinstein of music, at least until Puff Daddy came along.

Ten years later I married my boyfriend- the only man I ever dated who was not a musician, rapper or film maker, dragged him across the country to NY and had a baby. It was only then that I started writing again seriously. I used to balance him over my shoulder and type away. I was full of stories and he was a very amenable baby.

I sometimes wonder where I would be if I had stayed on track with my education. But then I think, if I had, perhaps I wouldn’t have so many experiences to draw on. I’ve done a lot of stupid things in my life and they are all fodder for the page.

So much of my writing comes from the personal, things that I have felt (or perpetrated). I can imagine if I have to, but I have to be able to put myself there first in order to write it truly. This does not mean however that if my character catches fire, I need to light a match to my clothes.

I’m going to be serious for a moment because actually I am very serious about writing. It matters a lot to me.

Writing is about truth. It can be a miniscule truth or a gigantic truth or an all-encompassing truth, but it cannot ring false. You can’t get all tricksy with your readers.

So whether that be a realistically portrayed society in the aftermath of an apocalypse, or the reactions of a girl who discovers her boyfriend is cheating on her, or the smell of fresh-mown grass in September, I think there’s a responsibility to hew as close to the real as we can.

Thank you Jo for sharing that!