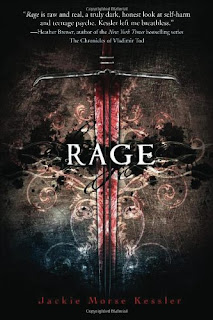 We are pleased to welcome Jackie Morse Kessler. Jackie is the author of Horsemen of the Apocalypse series, which thus far includes: Hunger and Rage.

Missy didn’t mean to cut so deep. But after the party where she was humiliated in front of practically everyone in school, who could blame her for wanting some comfort? Sure, most people don’t find comfort in the touch of a razor blade, but Missy always was . . . different.

That’s why she was chosen to become one of the Four Horsemen of the Apocalypse: War. Now Missy wields a new kind of blade—a big, brutal sword that can cut down anyone and anything in her path. But it’s with this weapon in her hand that Missy learns something that could help her triumph over her own pain: control. 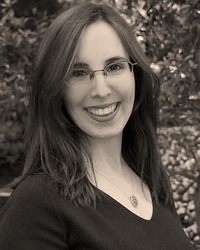 Describe your book in five words or less.

Filled with traffic! 🙂 I still haven't sold my first novel (going on,
um, 24 years now, yikes). And my second novel had a great narrator and characters but, well, no story. Oops. My third book was the one that scored me an agent and got me a three-book deal. (I thought it was urban fantasy; it sold as paranormal romance. Sometimes, the two don't play nicely together!) Then I coauthored a dystopian superhero series with Caitlin Kittredge, and the books came out in trade paperback…just as the economy tanked. Ack! But then I finally started the Riders of the Apocalypse, and
life was good. **pauses** What does it say about me that writing about the end of everything is when I'm happiest? 🙂

How did the idea for the series, Riders of the Apocalypse, come to you?

I had the idea for the first book, HUNGER, for 10 years. That's about an anorexic girl who becomes the new Famine, one of the Four Horsemen of the Apocalypse. I used to be bulimic, and I very much wanted to write a book that focused on eating disorders. My agent convinced me to write it, and she
sold it to Harcourt (hooray!!!). And after I handed it in, my agent said to me, "So which Horseman are you writing about next?" And this time, I didn't have 10 years to let it percolate! Based on events in HUNGER, it made sense that the next Horseman would be War. And because of that, I came up with the notion of a self-injurer becoming the next incarnation of War.

What is the hardest part of writing for you? What's the easiest?

Hardest? Finding the right beginning. I can't start writing until I have my first sentence. It's one of those annoying author quirks. I wish my quirk were that I had to start every writing session with a bit of chocolate! (Oh, wait…)

Easiest? When I really get into the flow of the story, it's like magic. Seriously. That's when the words come so fast that it feels like all I'm doing is transcribing the story that's been beamed into my brain. Crazy but true.

What's something surprising about yourself that most people wouldn't think true?

I've been told that people think I'm taller. I'm really not! I'm not even five feet tall. Sad, really. I'm positive the nurse during my physical was a total sadist. Four eleven and three-quarters. Sheesh! Give me the 1980s, when, thanks to Aqua Net and Big Hair, I was at least five-foot three!

What is one question that you've always wanted to be asked in an interview? How would you answer that question?

Question: Is it true that your editor had to get off the phone with you because Joss Whedon was on hold?

Answer: Yes, it's true! I was talking to my Dark Horse Comics editor about doing a short comic book set in the Buffyverse, and at one point he said to me, "Jackie, that's Joss on line 1. He's very difficult to get a hold of; would it be OK if I call you back?" And I was like, "Oh, sure thing." But I was thinking: AAAAAAAAAAAAAAAAAAAH THAT'S JOSS WHEDON ON LINE ONE!!!!!!!!!!!

Learn more about Jackie and Horsemen of the Apocalypse at:

Jackie's next stop is Lauren's Crammed Bookshelf at http://laurenscrammedbookshelf.blogspot.com/.