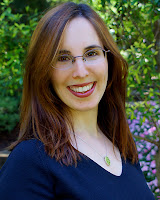 Today, I have the great pleasure of hosting an interview with Jackie Morse Kessler, author of Hunger and Rage.

How did the idea for the Horsemen of the Apocalypse series come to you?

I wanted to write HUNGER for 10 years, but I didn't let myself, because I wasn't convinced that anyone would want to read it. In October 2008, I pitched the idea — an anorexic teenage girl becomes the new Famine, one of the Four Horsemen of the Apocalypse; hard-hitting look at eating disorders — to my agent, and she enthusiastically told me that I should write it. So I did, and when I handed it in and Harcourt bought it, my agent said to me, "Which Horseman are you going to write about next?" And I was like, "NEXT???" Happily, I came up with the idea for RAGE in less than 10 years. 🙂

I'm not the first person to write about an anorexic girl becoming Famine. Marvel Comics did it back in the 1980s, which I mention in my Author's Note at the end of the book. They took a very different spin on it than I did; I wanted my book to be about eating disorders and the Marvel character was all about kicking superhero ass (she was a villain in the comics). Other influences include Neil Gaiman and Terry Pratchett's amazing book GOOD OMENS, as well as Piers Anthony's Incarnations of Immortality series, especially the first book, ON A PALE HORSE.

I know that you've written a few adult books, did you set out writing Horsemen of the Apocalypse for teens on purpose?

Actually, no. HUNGER could have had an adult protagonist. I think I tried it that way first, when I was first figuring out who the main character was. But it wasn't until I decided to loosely base Lisa on someone from my life that I realized that she was supposed to be a teenager.

What was one of the most surprising things you learned in creating your books?

Pieces of the Riders' history came to me at interesting times. I mention something in R

AGE that had almost been a throwaway line, but that wound up being an important plot point in LOSS (Book 3 of the Riders of the Apocalypse). And as I was working on that book, I finally discovered exactly why War and Famine despise each other — and that will be shown in the last book, not in LOSS.

What would you say is your interesting writing quirk?

I don't know if it's interesting, but I have to have a first sentence. If I don't have a first sentence, I can't get started. It's very frustrating — I could know everything about the book, except for exactly how it starts, and that will tie me up for a small piece of eternity.

What's next for you? Are you currently working on or have plans for future projects?

As soon as I'm finished writing LOSS (due to my editor by May 15, eek!!!), I have a middle-grade novel I'm itching to write for my boys. And I also have an idea for a YA paranormal romance duology. And, of course, there's BREATH, which is the fourth book in the Riders series. **rubs hands gleefully**

Oooo, can't wait to read more from you Jackie! Thanks for answering my questions.