Today I have with me the fantastic Sheila A. Nielson, upcoming debut author of the book Forbidden Sea. I'll have my review of her book up later this afternoon.

As a former children's librarian, how do you think working in such an environment has affected you as a writer?

I feel that being a librarian has affected my writing a great deal. The reason I chose to write a mermaid story in the first place is because so many children were coming into the library asking for mermaid books and we had very few to offer them. Even now, I find myself trying to think up future stories on subjects the library has a lot of need for. Talking to kids day in and day out also helped me to see the kinds of things they like, especially in the books they choose to read. 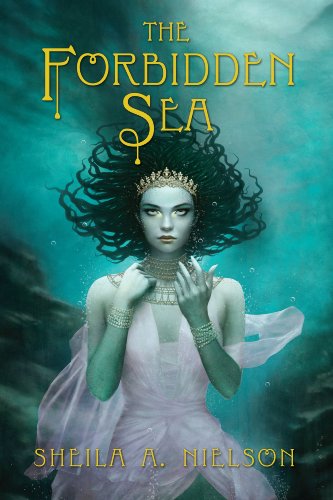 inspiration behind your novel Forbidden Sea?

Because there were so few mermaid books available, I knew I wanted to write one, but didn't quite know where to start. I had another story I'd been thinking of writing, but it had a lot of plot problems–and no mermaid. Once I added the mermaid, the story just fell into place like magic. Figuring out what the merfolk would be like in my story was probably the best part of writing Forbidden Sea. As a very young child, I had loved the idea of mermaids but didn't like the way they were portrayed in traditional mythology. I used to imagine up all sorts of things about what I thought mermaids SHOULD be like. I ended up returning to these childhood ideas to create the merfolk in my story.

Is Forbidden Sea a stand-a-lone novel or will there be more forthcoming?

I originally meant the book to be a stand alone. But my writer's group felt there was just one important question left unanswered at the end of my story (which is a spoiler so I won't write about it here)and they wanted me to write a sequel about it. Because of this, I ended up writing an entire companion novel, which is almost complete. My editor told me that they will only be interested in seeing the sequel if Forbidden Sea sells well. So if you want to read the sequel, go out and buy Forbidden Sea! 🙂

What type of research did you do when writing Forbidden Sea?

I had to do all kinds of historical research while writing this book. Especially about what people once believed about mermaids many years ago. The people of the Orkney Islands have a well documented history when it comes to believing in merfolk. Much of my research came from studying their history and historical records of actual mermaid sightings that were once reported by fishermen. I also happened to have a very dear librarian friend who can research what a dog kennel was like in the late 1800's without batting an eyelash. I owe much of my book's obscure details of daily life to her awesome research skills. What can I say–librarians ROCK!

Anything else you would like to tell your readers?

There would be no authors if there weren't readers, so thanks to all of you for giving this author a chance to share her story.

And thank you, Kristen, for inviting me to be on your fabulous blog!

Thank you Sheila for taking time out to answer my questions!