Today, I have T.M. Goeglein, author of Cold Fury, on the blog to answer some questions about his debut novel, which he wrote in Chicago (the greatest city ever).

A little about T.M. first:

T.M. Goeglein began his career as a writer of print and television ads for a host of advertising and media companies. As a screenwriter, he created both original scripts and worked as a script doctor for several production companies in Los Angeles. He was an original contributor to the Huffington Post 'Living' section, and continues to write for both the national edition and Huffington Post Chicago. Read T.M. Goeglein's stories on the Huffington Post.

His debut young adult novel, COLD FURY, was published by Penguin/Putnam on July 24, 2012 and is the first in a trilogy; he’s currently working on the second and third book. He lives in Chicago with his wife, Laura, and two young children. 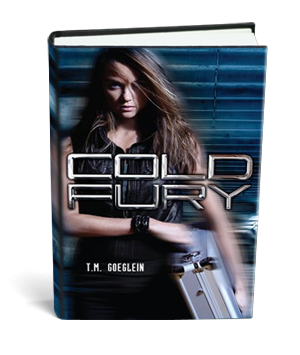 How did you come up with the idea for Cold Fury?
It grew from the idea of a really strong female protagonist caught in a very bad situation not of her own making. Plus, the Outfit (Chicago’s venerable crime organization) is an old time boy’s club – no women allowed – and I wanted her to infiltrate it, crack some heads, and shake it up forever.

There is a lot of Chicago architecture featured in Cold Fury, how much research went into creating this book?
Really, the only research came from being a native and loving the city; it’s not an understatement to say that it has some the greatest architecture in the world. There’s an old tradition in Chicago of being a sort of living museum-laboratory for really smart, cool architects. Basically, you walk outside and trip over masterpieces all day long.

I found it interesting that Sara Jane is in a film club, do you have a lot of experience with films yourself and how did that play a role in writing this book?
I wrote (and still write) screenplays for a long time, and besides comic books, movies have had the greatest effect on me as a writer. Good movies are like modern day parables for people to help inform them about the events of their lives. How many times have you been in a conversation when someone makes a point by saying something like, “That’s exactly like the Shawshank Redemption…”

The villains in this book are quite colorful and fascinating characters, was there anything or anyone you based these villains on?
More than anything, it seems that frustrated ambition often lies at the heart of terrible people. Every S.O.B. in COLD FURY wants something badly that they can’t have or doesn’t belong to them, and it makes them as rotten old bananas. Like mold, the rest of their character just sort of grew up around them.

How many more books can we expect in this series and are there other writing projects you are working on?
COLD FURY is the first in a trilogy, so two more books will follow with Sara Jane kicking ass and running for her life. Yeah, I’m working on a new project…I can’t tell you about it yet, but it’s just as much (or more so!) of a thrill ride as COLD FURY.

Thank you so much for answering my questions! I can't wait for the next book!