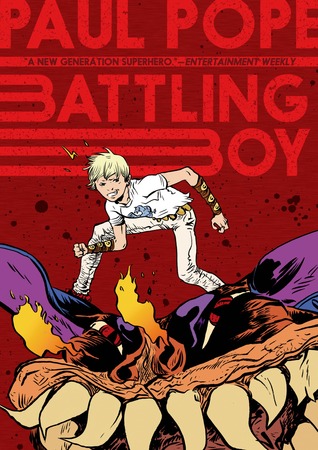 The adventure begins in the new graphic novel by comics legend Paul Pope.

Monsters roam through Arcopolis, swallowing children into the horrors of their shadowy underworld. Only one man is a match for them - the genius vigilante Haggard West.

Arcopolis is desperate, but when its salvation comes in the form of a twelve-year-old demigod, nobody is more surprised than Battling Boy himself.

IT'S TIME TO MEET AN ELECTRIFYING NEW HERO.

Battling Boy was one of my many exciting finds at ALA this year and as a big fan of graphic novels, I could not wait to dig into it. I loved the mix of mythology with fantasy right away. Now, I have to say I'm not a big fan of traditional super hero graphic novels, and I felt this one fell a little in toe with what you'd see in adult superhero stories. It's definitely a lot more graphic, gross and geared towards middle grade readers.

As for character development, Battling Boy has a long way to go. I know he is the son of a God which makes him quite less human, but I honestly felt more attached to Aurora's character – the daughter of the deceased Haggard West. She is trying to become prepared to take her father's place when Battling Boy makes his entrance and steals the show. He's a bit disorientated and feels guilty about needing his father help to take out his first monster.

The politic involvement drove me a little away from liking Battling Boy as he went along with the parade in his honor after taking out just one monster. Since I'm not a traditional superhero graphic novel reader I didn't really connect with what was happening and it felt a little forced. I'm hoping the second volume picks up speed and that more of Aurora is shown and hopefully in a way that empowers her as a female character. I'm a bit weary that it will follow the traditional story of women always needing to be rescued, etc.

Overall, I really enjoyed the illustrations and the basic story line. I hope the characters develop more as the graphic novels continue and felt it was a bit of a slow start getting to know them in this first volume. Definitely for those who love a good superhero story.