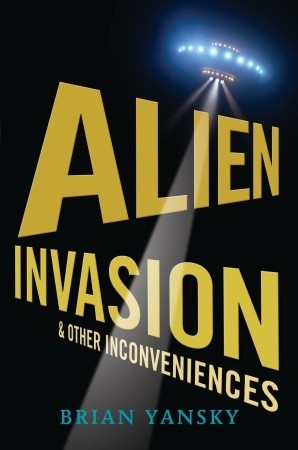 A polite race of telepathic killer aliens, a ten-second world conquest, and one teenage boy collide in this wry, gutsy adventure.

Jesse is in history class when a formidable, efficient race of aliens quietly takes over the earth in less time than it takes him to brush his teeth. Most humans simply fall asleep and never wake up. In moments, everyone Jesse knows and loves is gone, and he finds that he is now a slave to an inept alien leader. On the bright side, Jesse discovers he’s developing telepathic powers, and he’s not the only one. Soon he’s forging new friendships and feeling unexpectedly hopeful. When a mysterious girl appears in his dreams, talking about escaping, Jesse begins to think the aliens may not be invincible after all. But if Jesse and his friends succeed, is there anywhere left to go? Brian Yansky offers a funny, grim novel packed with everything boys and sci-fi fans love: aliens, humor, action, and a healthy dose of triumph.

When I first heard of the book, I laughed my butt off. I love the book description and was excited to do a tour with Teen Book Scene for this book. I have to say, I didn't think this book would be as serious as it was. Yes, it had humorous moments, but definitely a serious plot line – so serious that lots of people and aliens did die. It was interesting seeing the progression of what happened after the quickest invasion of a world ever. You follow the character Jesse, who survives and ends up getting assigned work in the mansion of the alien in charge of the invasion. The aliens seem invisible, able to kill with what seems to be a look – but Jesse finds himself developing other skills that may save his planet and his new friends.

There was a great sense of danger, adventure and even blossoming romance in this book and I was taken in by the novel. I could barely put it down without wanting to know what would happen next.

Jesse is sort of your average teenage guy and I sort of cracked up at his reactions to the whole situation. He just takes it in and goes with it. Luckily, he's fairly smart and picks up on some strange things happening to him as he spends more and more time by these aliens.

The aliens themselves were quite interesting. I liked that they had not only military type aliens but others that were not for killing humans and ended up helping humans on and off in the book. I definitely want to find out more and hope that it will continue on into a series.

Final Verdict: Anyone who likes science fiction or just wants something a bit different will enjoy this book.

11 responses to “Book Review: Alien Invasions and Other Inconveniences”