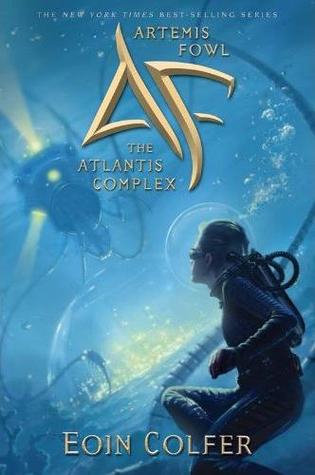 Artemis has committed his entire fortune to a project he believes will save the planet and its inhabitants, both human and fairy. Can it be true? Has goodness taken hold of the world’s greatest teenage criminal mastermind?

Captain Holly Short is unconvinced, and discovers that Artemis is suffering from Atlantis Complex, a psychosis common among guilt-ridden fairies -- not humans -- and most likely triggered by Artemis’s dabbling with fairy magic. Symptoms include obsessive-compulsive behavior, paranoia, multiple personality disorder and, in extreme cases, embarrassing professions of love to a certain feisty LEPrecon fairy.

Unfortunately, Atlantis Complex has struck at the worst possible time. A deadly foe from Holly’s past is intent on destroying the actual city of Atlantis. Can Artemis escape the confines of his mind -- and the grips of a giant squid -- in time to save the underwater metropolis and its fairy inhabitants?

I absolutely love the Artemis Fowl series – it is one of the best middle grade series I have ever read. It mixes a few different genres with fantastic characters, hilarious dialogue, and a plot that always twists and turns.

I actually was a bit surprised about this book. I never thought they would throw a curve ball like Artemis slowly losing his sanity. But, if you know Artemis, there's always something strange going on with the evil mastermind. Beyond that, there is still a spectacular blend of action, suspense and the usual twists and turns. Eoin Colfer is a genius. Seriously.

I love all the characters – even the "bad" guys. They're just so unique and different from the usual that you can't help but like them just a teensy bit. The narrator on the audiobook version I listened to does a fantastic job on Butler's voice and due to that and his personality… Butler is probably my favorite character.

Final Verdict: I think that readers looking for something a bit different in middle grade sci-fi and fantasy will find it in the Artemis Fowl series. Definitely one of my favorite series ever.