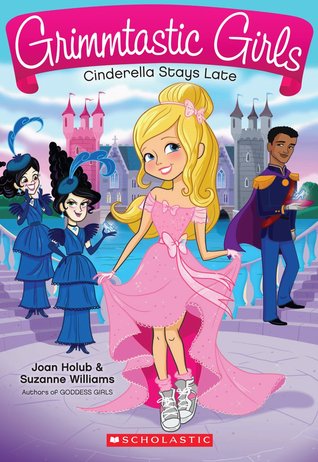 The authors of the hit Goddess Girls series put a fun and girly twist on another super-popular theme: fairy tales! Once upon a time, in faraway Grimmlandia... A Grimmtastic girl named Cinderella is starting her first week at Grimm Academy on the wrong foot. Cinda's totally evil stepsisters are out to make her life miserable. The Steps tease Cinda, give her terrible advice about life at the academy, and even make her look bad in front of her new friends, Red, Snow, and Rapunzel! But when Cinda overhears the Steps plotting a villainous deed that could ruin Prince Awesome's ball, Cinda, her new friends, and a pair of magical glass slippers have to stop them--before the last stroke of midnight!

Cinderella Stays Late is the first in a new series called The Grimmtastic Girls. Being a huge fan of fairy tales, I couldn’t wait to dig into this new twist for elementary readers. A lot of my students love Holub’s Goddess Girls series, so I was sure I would enjoy this new series. Cinda is just starting her first week at the Grimm Academy, her step sisters having been going for a while, so she’s somewhat dependant on their help. Unfortunately, they are not the nicest stepsisters and start to cause her problems from day one, when they give her some intentional bad advice.

They do start cozing up to her when they know she will be having classes with a new Prince, one they wish to catch the eye of. Cinda is more concerned with making new friends, trying to fit in and keeping up with her classes. She makes fast friends with Red, Snow, and Rapunzel, my favorite of which is Rapunzel, who is a gothy version and I cannot wait to get to her book in the series. So far, it seems like each book will feature a different character and within the first book is introduced a hint to an EVIL society that wants to wreak havoc on the school.

I also love the Prince Awesome is named just that. I love the relationship that Cinda forms with him, more of a friendship than a romance, but still one her stepsisters are jealous of. They pull some tricks that make her miserable, but she braves on throughout the book and stands her ground without going down to their level of pettiness.

With a strong start, The Grimmtastic Girls looks like a great series to watch out for. I’d suggest it for fans of Monster High, Harry Potter and all things fairy tales. I really loved Cinderella Stays Late and cannot wait to read the second in the series.