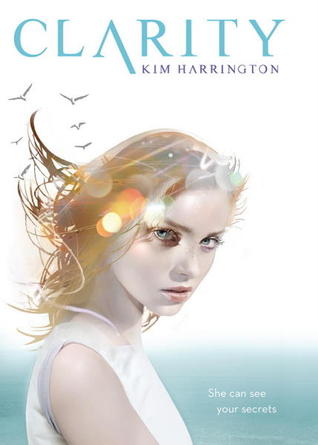 When you can see things others can't, where do you look for the truth?

Clarity "Clare" Fern sees things. Things no one else can see. Things like stolen kisses and long-buried secrets. All she has to do is touch a certain object, and the visions come to her. It's a gift.

When a teenage girl is found murdered, Clare's ex-boyfriend wants her to help solve the case--but Clare is still furious at the cheating jerk. Then Clare's brother--who has supernatural gifts of his own--becomes the prime suspect, and Clare can no longer look away. Teaming up with Gabriel, the smoldering son of the new detective, Clare must venture into the depths of fear, revenge, and lust in order to track the killer. But will her sight fail her just when she needs it most?

With the YA selection overflowing with paranormal reads, Clarity stands out from all the same old, same old to offer something completely new and refreshing.

Clare Fern is one part of a family with special abilities. Her mother is a telepath, her brother is a medium, Clare is a physic… and the father? Not much is known about him. Clare's family have craved out a special niche as the local "entertainers" in a small New England town. They do readings and the like which has most of the town classifying them as freaks. But when the town experiences an ultra rare murder, it is up to Clare and her family to find out who-done-it.

Going into Clarity, I had low expectations. The summary lead me to believe that the novel would primarily focus on the paranormal, and not so much on the murder mystery aspect. But actually, the opposite occurred. The powers were there.. the characters use them.. but it does not define who they are. And for that alone, I adored Clarity.

But there is so much more to this novel. Ms. Harrington, my hat goes off to you for creating a paranormal novel that defies everything that is on the shelf right now. Fantastic characters, a murder mystery that will leave you guessing up until the very end, and a romance that is FAR from typical.

I have gotten to the point where romances in YA paranormal novels annoy me. They are easy to predict, and usually offer nothing new. But Harrington took all of this a step further.. in the opposite direction. Nothing in Clarity is as it seems. Which makes me love it all the more.

Clarity is hands down one of the best YA paranormal reads of this year. And Harrington is a debut author to boot. If you are looking for something that strays for the typical path, give Harrington's Clarity a try. You will not be disappointed.

One response to “Book Review: Clarity”