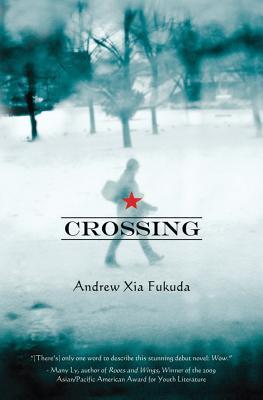 Crossing is a thriller about an immigrant Chinese teenager who suddenly finds himself at the center of mysterious abductions occurring in his high school. A loner in his all-white high school, Xing has only one friend: Naomi Lee. Also originally from China, she is a brilliant, beautiful classmate. For years she has been Xing's best friend, but now he longs for more.His staid existence is intruded upon by a series of bizarre incidents. Students at his school are disappearing. No one can explain it; classmates simply vanish into thin air, victims of a serial abductor. The blue collar community is completely flummoxed by the unfolding events.

Only Xing, alone on the sidelines of life, is privy to some peculiar sightings around town. Yet his quest to uncover the truth is delayed by the most unlikely turn of events. A miraculous discovery of a singing talent thrusts Xing into the limelight as the lead of the school musical. By a single stroke, he can now achieve two elusive dreams: acceptance from classmates and affection from Naomi.But the disappearances continue. And as Xing draws closer to unveiling the identity of the abductor, he senses a noose of suspicion tightening around his own neck. Xing's immigrant story - his desperate bid for acceptance in white America, the devastating sting of rejection - not only serves as the backdrop to this psychologically rich tale, but propels the action toward a chilling climax.

Crossing is a breathtaking look into the prejudices that our society can have. Told through the eyes of a Chinese immigrant, the reader really gets to the heart of what it means to be different. Xing (aka Kris) is not known for his amazing singing ability. He is not known for his academic skills. What is known for is being an outsider. A Chinese student surrounded by hundreds of white students who know nothing about being in his shoes. Fukuda gets right to the heart of Xing and his life. The reader easily grasps Xing’s culture and even what he must have had to endure on a day to day basis. The hurt and the prejudice that came along with being one of only two Chinese students is a fresh, open wound. One that is constantly on Xing’s mind.

Fukuda’s writing brings forth the endless emotions that Xing undergoes in a realistic and heartfelt way. Although, I do not know how it feel to be alienated in the manner that Xing was. The emotions that Fukuda uses can be felt on numerous levels. Fukuda makes you care about Xing and what happens to him. You know his hopes, his fears… his dreams. And you cannot help but want the best for him.

Crossing and its author blew me away. I loved the messages that Fukuda explores, and the way he went about it. Often times, you will read a novel and the author will have a wonderful message, but it may come across as preachy or too in your face. But that is not the case with Crossing. Fukuda presents his message and gives the reader a chance to make-up their own mind. An example of this is the novel’s ending. While I cannot say that I loved the ending, I must admit that it stuck with me. It was a very frustrating point in the novel for me, but the more I think about it… the more it makes sense. Xing is, to a point, a flawed character. He may want to persue his hopes and dreams, but deep down he realizes the truth of his situation. And I believe that if the ending had been happier, then I would not feel the way that I do about his character. So, in the end, I am honestly torn about the ending. But thankfully, I am not torn on how I feel about this novel. It truly was an amazing experience. And I believe that Fukuda a has bright future in store for him as a writer. It was honesly a pleasure to read this refreshing novel. Highly Recommend.