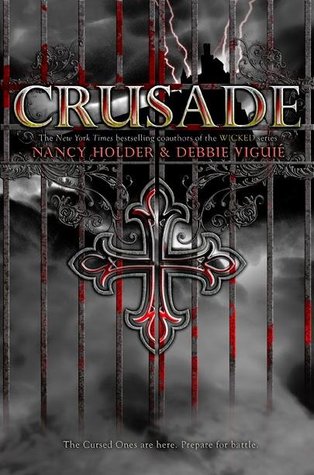 The ultimate battle. The ultimate love. For the past two years, Jenn has lived and trained at Spain's Sacred Heart Academy Against the Cursed Ones. She is among the few who have pledged to defend humanity or die trying. But the vampires are gaining power, and the battle has only just begun.

Forced to return home after death takes a member of her family, Jenn discovers that San Francisco is now a vampire strong-hold. As a lone hunter apart from her team, Jenn is isolated—and at risk. She craves the company of her fighting partner, Antonio: his protection, his reassurance, his touch. But a relationship with Antonio comes with its own dangers, and the more they share of themselves, the more Jenn stands to lose.

Then Jenn is betrayed by one who was once bound to protect her, causing her to doubt all she had held as true. To survive, Jenn must find the courage to trust herself—and her heart.

Crusade was nothing like I expected it to be. What I was expecting? I am not completely sure. But whatever it was, it is not what I got. Crusade simply is amazing. From the very beginning, I was in shock at how original this novel is. Yes, the basic ideas for Vampires and their lore is there. But it is told in a completely fresh way.

From the very first page, readers will quickly realize that Crusade is not your typical vampire novel. Gone are the many stereotypes that reader are familiar with. The first one being that Vampires are our friends. Because the truth is that they are not. And that reality comes at a cost. But is that cost really worth dying for?

The basic tale focuses on Jenn. She and a group of teens are fighting to take back control of our world. A world that recently has discovered that Vampires exist. That they are not just the stuff of legend. However, while most Vampires want you to believe that they are friendly, the sad truth is that most are not. They simply are hiding behind this facade to gain our trust. A trust that they are not in the slightest bit hesitant about betraying.

Crusade is a novel of surprises. From the concept to the characters, everything about this novel took me by surprise. And it is hard to explain exactly what makes this novel so magical when everything about was just spectacular. It is simply one of those novels that you just have to read. You will devour it and leave with the sense that you have to have more. Highly Recommended.