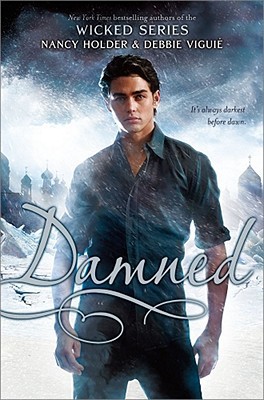 There is a fine line between love and sacrifice….

Antonio would do anything for his beloved fighting partner Jenn. He protects her, even suppresses his vampire cravings to be with her. Together, they defend humanity against the Cursed Ones. But tensions threaten to fracture their hunting team and his loyalty—his love—is called into question.

With an even more sinister power on the rise, Jenn must overcome her personal vendettas.

Antonio and Jenn need each other to survive, but evil lurks at every turn. With humanity’s fate hanging in the balance, they must face down the darkness…or die trying.

After being so impressed by Crusade, the first book in this series, I have been (im)patiently awaiting the release of Damned. In the first novel, Holder and Viguié blew me away in their presentation of a vampire war. I adored and applauded Crusade for its originality and gusts. And was super excited to get transported into this world again.
Where do I start with this? Ever since I have finished the last page, so many different thoughts are going through my brain. And if I ever thought that Crusade was dark, then I have no idea how to classify Damned. Maybe super dark? Darker than black? Well, whatever shade of darkness it is, Damned is DARK, with all caps. Holder and Viguié definitely seem to know what I want in my vampire books. Here the enemy vampires are not sparkly, friendly, or something inbetween. They want world domination or nothing. I fear that Holder and Viguié have spoiled me. Leaving me to never look at a (wimpy) vampire book the same again.
Damned opens with the characters having to pick up the pieces from the last mission. Jenn's sister has been transformed into a vampire. Antonio seems to be on the outside looking in with his relationship with Jenn. Eriko is struggling to keep up. There are plenty of refresher details interwoven from the last book, Crusade, to get readers back into the flow of things for Damned.
Holder and Viguié took things into a totally new level with Damned. Our characters are faced with new struggles and hardships, some that I am not sure even they saw coming. The team is under attack… from the inside. Trust, baggage, struggles are key components. And throughout all of this, Holder and Viguié constantly pulled on my heartstrings. I was left on the edge of my seat as I watched the team crumbling. Met new characters. Debating on who I wanted to be with whom. There are so many thoughts swirling through my head that I feel like I just cannot do this book justice.
Final Verdict:
Damned really raised the bar for this series. Watching our characters struggle. Going through all the twists and turns that Holder and Viguié threw my way, I am just left dizzy trying to fully absorb everything. Damned is one hella of a second novel. And with plenty of plot threads setting up for the next book, I know that I will be in for another ride.