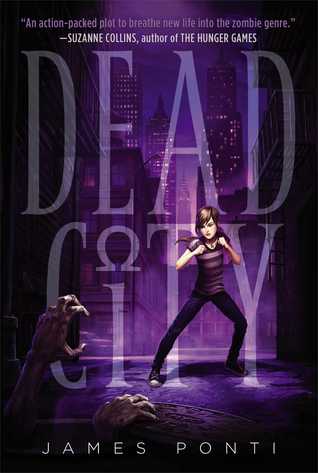 The Hunger Games author Suzanne Collins says this paranormal action-adventure “breathes new life into the zombie genre” and has “a terrific twist of an ending.”

Most kids have enough to deal with between school, homework, extracurricular activities, and friends, but Molly Bigelow has something else on her list: hunting zombies. By day, Molly attends MIST—the Metropolitan Institute of Science and Technology—but outside the classroom she’s busy dealing with the undead. Because not only do zombies exist, they’re everywhere, and it’s her job to help police them and keep the peace. Sure, she’d like to be a regular kid, but given that her mother was the most revered (or feared, depending on your perspective) zombie hunter in the history of New York City, “regular” just isn’t possible. Molly’s got some legendary footsteps to follow—and some undeadly consequences if she fails.

Dead City was a book I anticipated reading, as it seemed to take a more action themed look at dealing with zombies. I thought it was an intriguing idea of having a group of kids that do not hunt zombies, but police that society. Beyond that, I love strong female characters and the fact that Molly is a smart girl who doesn't realized she has been trained for being a part of MIST her whole life. So when she is asked to join the team, she finds that she is passing all of the tests with flying colors.

Different than traditional zombie books, Dead City explores the depths of what it would be like to have zombies as another population, one that is hidden from the public. There are different types of zombies, ones which can pull off looking human and others that are more violent. Already, Molly is showing an emphathetic connection to the zombies and their society. I'll be interested to see how this is explored in the next book. Beyond liking Molly as a character, I love all of the members of her group.

I loved all the scenes in the morgue throughout this book. Because Molly's mother used to be a forensic psychologist and passed on, she finds spending time at the morgue makes her feel closer to her mother. I felt they balanced Molly as a character, as all girls act like girls at some point. She sometimes is a little girly but overall a smart girl and a bit kick-butt at times.

Final Verdict: Dead City is a zombie book that really pulled me with great characters and an interesting plot that will make me pick up the next book.