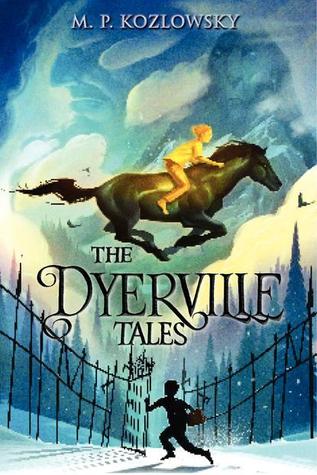 Vince Elgin is an orphan, having lost his mother and his father in a fire when he was young, but beyond that, his life hasn't been much of a fairy tale. With only a senile grandfather he barely knows to call family, Vince was remanded to a group home, where he spun fantastical stories, dreaming of the possibility that his father, whose body was never found, might one day return for him. But it's been a long time since the fire, a long time since Vince has told himself a story worth believing in.

That's when a letter arrives, telling Vince his grandfather has passed away. Vince cannot explain it, but he's convinced that if his father is somehow still alive, he'll find him at the funeral. He strikes out for his grandfather's small hometown of Dyerville carrying only one thing with him: his grandfather's journal. The journal tells a story that could not possibly be true, a story of his grandfather's young life involving witches, giants, magical books, and evil spirits. But as Vince reads on and gets closer to Dyerville, fact and fiction begin to intertwine, and Vince finds that his very real adventure may have more in common with his grandfather's than he ever could have known.

Vince has almost given up hope of ever finding his lost father, when he hears word of his grandfather’s death. The Dyerville Tales is the story of Vince, the boy and of his grandfather’s own stories, which he shared with an orderly at the home and who wrote them down. The stories are fantastical and Vince loves them, but wishes he knew the truth behind where his family really came from.

There’s a sort of hope to the stories and as a reader, I wished hard they would seep more into Vince’s world. I love Vince’s character, a somewhat jaded boy who still wants to believe in fairy tales, but his logical sense steers him away from completely believing. There were moments I wanted to jump into his grandfather’s world and I really wished for a little more magic coming alive, instead of being in the past.

Vince is a storyteller himself, much like his grandfather, so I feel like he is an insider into adding magic to storytelling. I’m compelled to love orphan characters ever since reading Oliver Twist in high school and Vince fits the setting of orphan on an adventure. I love that he has to keep dodging the mistress of the orphanage to find out the truth behind his family and his grandfather’s story.

All in all, The Dyerville Tales tells a wonderful story that makes you wish for magic and an ending that you can take in a variety of ways. I definitely enjoyed the stories told and the mystery behind Vince’s past.