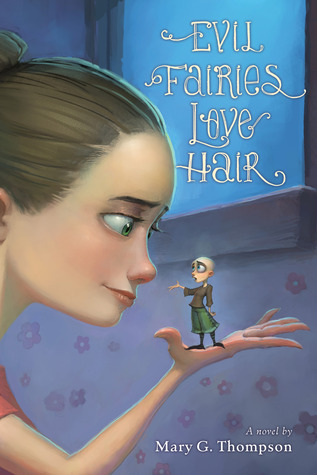 Ali and her middle school classmates are raising flocks of fairies to make their wishes come true. But growing a flock is harder than it sounds: the fairies eat only human hair, and the rules for dealing with them are confusing, misleading, and subject to change. As Ali and her friends struggle to earn their wishes, mistakes are made, spells go awry, and soon Ali is up against hundreds of two-inch-tall imps who have very big plans. Comedy and fantasy intertwine in this lively tale of intrigue, magic, and the power of hair.

Evil Fairies Love Hair captured my attention from the first page. If I could have grown a flock of fairies in middle school and gotten a wish, I wonder if I would have gone for beauty. Ali is sick of feeling like the dumb sister, so she decides to grow her fairies so she can gain more aptitude. The only problem is there are a lot of rules and ones that don’t appear until it’s too late. A boy named Michael passed them onto her and if she doesn’t succeed, he won’t get his wish either – which is to gain more sports talent.

Ali has a rough start with the fairies, as what they eat is human hair and she has to cut off her sister’s hair to get enough. Even more complicated is when she stumbles upon what looks to be a human taken over by a fairy at the hair salon and the mystery of where the kids go who don’t complete their flock or break the rules. Ali takes it in that she will help save them all, but she still clings to wanting her wish at the same time. It’s a tricky thing to try to not break the rules while doing something against the fairies.

Of course, the story is much more than that, as the fairies aren’t actually fairies but Divvy Imps who were sick of enslavement to children and in turn are enslaved to children but in a different way. The head fairy thinks she will be able to fix their enslavement, but Ali keeps getting in her way. I really enjoyed the different twists and the somewhat humorous way that fairies crave hair. I found Ali to be a bit brazen and although she doesn’t think she is smart, she proves time and again to come up with ideas that will get them out of the bind they are in.

There was a lot going on in Evil Fairies Love Hair and I think the author balanced the background well with what was happening in present time. I loved learning about the fairies’ background and getting a glimpse into what they were planning and why. Ali and her family are somewhat typical, she feels belittled by her smarter and prettier older sister, but realizes later the importance of her family and being herself.

A solid middle grade novel with fairies, family, friendship and an evil plot to stop.