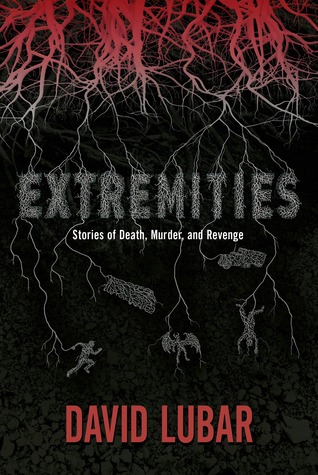 Master of the macabre David Lubar turns his attention to dark and twisted tales for teens with Extremities: Stories of Death, Murder, and Revenge

A group of high school girls takes revenge on their sadistic gym teacher in the most fitting way possible. Two stowaways find themselves on a ship for the dead. An ancient predator stalks the wrong victim. Here are thirteen tales of death, murder, and revenge from the fertile and febrile imagination of master storyteller David Lubar—his first story collection for the teen audience.

Extremities: Stories of Death, Murder, and Revenge is a set of short stories that are darker than most stories that David Lubar writes. The preface of the book addresses that often times his stories can fit into a book for younger readers, but these are not them. I also suggest not reading this at night if you tend to have nightmares, which is of course when I read it. All alone in my apartment, in the dead of night – not the best plan.

Many of the stories were full of gruesome creatures, deaths and moments that made the reader feel as if they were watching a horror movie. The stories were short and to the point and some were more interesting to others to me personally. I don't care for horror itself and preferred the stories that had a paranormal element to it instead of just bloodshed and creepiness.

My first favorite story was called Feelings – which starts off with a friend of the main character abadoning fear and weaving through traffic only to get hit by a truck. His girlfriend moves on quickly and soon that boy too is dead. It's at the second boy's funeral when she comes onto the main character and soon he realizes that something is wrong. Will he realize what's happening before he's killed? I just loved this story, it had an air of mystery with all the hints to figure it out.

My second favorite story was one of the last ones – Morph. A boy is in Chinatown when he sees an albino man buying a scorpion. Curious, he follows him to see him morph the scorpion into his hand and kill a Chinese man. A pattern begins and he finds that he must warn the next victim even if he is a dangerous man. This one had a lot of action, drama, and blood in it and I simple enjoyed this story.

Final Verdict: A creepy, horrific set of stories that will possibly give you nightmares, or at least a series of the creeps. Not all the stories were amazing, but I did like several of them. Read this book if you're in the mood for creepy short stories.

One response to “Book Review: Extremities: Stories of Death, Murder, and Revenge”