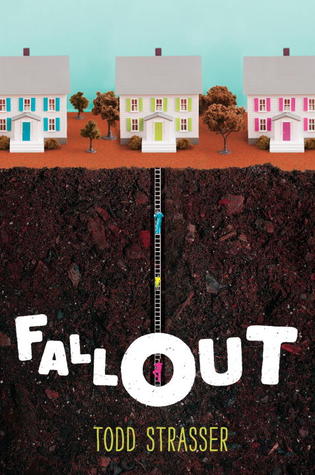 What if the bomb had actually been dropped? What if your family was the only one with a shelter?

In the summer of 1962, the possibility of nuclear war is all anyone talks about. But Scott’s dad is the only one in the neighborhood who actually prepares for the worst. As the neighbors scoff, he builds a bomb shelter to hold his family and stocks it with just enough supplies to keep the four of them alive for two critical weeks. In the middle of the night in late October, when the unthinkable happens, those same neighbors force their way into the shelter before Scott’s dad can shut the door. With not enough room, not enough food, and not enough air, life inside the shelter is filthy, physically draining, and emotionally fraught. But even worse is the question of what will -- and won’t -- remain when the door is opened again. Internationally best-selling author Todd Strasser has written his most impressive and personal novel to date, ruthlessly yet sensitively exploring the terrifying what-ifs of one of the most explosive moments in human history.

Fallout is an intriguing look at what would have happened if a bomb had dropped during the Cold War and the aftermath of poor planning by one family. Alternating between the events leading up to and after the fallout, the book follows Scott, a boy whose father is the only one in the neighborhood crazy enough to build a bomb shelter. His father and mother fight about what he is doing and Scott and his little brother wish he would build a swimming pool instead.

When the bomb is about to fall, his father protects his family, but others swarm to join them in the shelter and there is not enough food for them all. They force some out, but others get in and a fatal fall leaves Scott's mother unconscious. Arguments ensue while they struggle to survive on two weeks worth of food meant for 4 people, now turned into 10 people. The tension and the reality of the situation really is flushed out with figuring out how to go to the bathroom, the lack of extra clothes, a water tank that doesn't work and limited food.

I enjoyed the before and after chapters that alternated. The aftermath chapters were intense and the before showed a little more of Scott's boyish nature and the different sitatuions he gets into. Overall, Fallout left me with the intensity of thinking of how different the world would be if the Cold War became the next world war.

Final Verdict: Fallout took a tense time period and pushed it to the worse scenario. The shock value of the book made it an intense read and one I would recommend but with a warning of how tense it is, especially for younger readers. Fallout is definitely more of an upper middle grade novel.