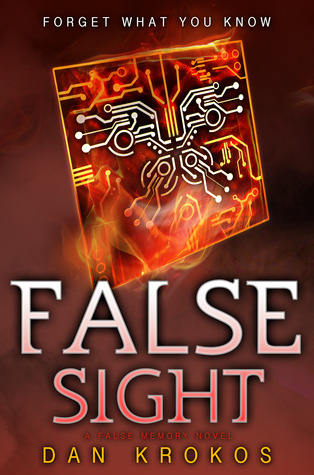 All Miranda wants is a normal life. She's determined to move past the horrible truth of her origin as a clone so she can enjoy time with her boyfriend, Peter, and the rest of her friends at school. But Miranda quickly learns that there's no such thing as normal - not for a girl who was raised to be a weapon. When one of her teammates turns rogue, it begins a war that puts the world in jeopardy. Now Miranda must follow her instincts - not her heart - in order to save everything she's fought so hard to keep. with the image of a terrible future seared into her mind, what will she have to sacrifice to protect the people she loves?

Dan Krokos's sequel to the tour de force False Memory is a mind-blowing thriller with high-octane action that will leave readers begging for the final book in this bold and powerful trilogy.

Last year, one of my break away hit reads was False Memory, the first book of this series. Dan Krokos completely hit it out of the park.. once I was able to get into the read that is. With False Sight, I was ready to get back into the action and see what was next in store for our characters.
Now I don’t know if it is Dan Krokos’ writing style, the fact that it has been about a year since False Memory, or something completely different, but like False Memory, there was a bit of an issue getting into False Sight. Which I found a bit sad. There is a part of me that really, really wants this series to succeed with me. But no matter how hard I try, there is always a bit of a disconnect. Sure, things tend to get better has I go on with the book, but this is the second time now where, for at least a bit, I am wondering if this series is actually right for me.
If you have read False Memory, then you know how crazy things can get. But that is nothing… and I mean nothing compared to what craziness awaits you in False Sight. And although, it did take me a bit to sort everything out, I have to say that I loved all the new additions of twists and turns. Krokos has really upped the game this time around.
Final Verdict:
False Sight had a bunch of promise… and a lot to live up to. Did it give me everything I wanted? Yes and No. Will I be back for the final installment? Heck yes. Although this is a series that I have a few overall issues with, every other element makes up for what can be lacking. False Sight really changed the way that I looked at this series, and I am sure that Krokos still has plenty left up his sleeve.