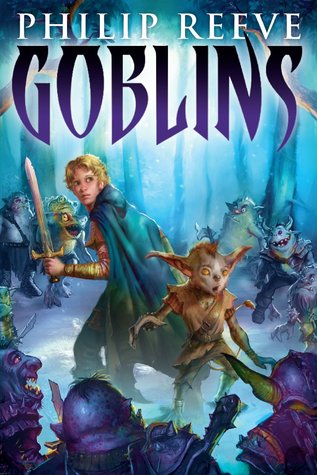 From the renowned author of Here Lies Arthur and No Such Thing As Dragons, the adventures of a goblin outcast who must save his world from the rise of a dangerous dark magic...

Welcome to a wild world of magical creatures and heroic adventure!

The squabbling goblins that live in the great towers of Clovenstone spend their time fighting and looting. Only clever young Skarper (who happens to be in exile) understands that dark magic created by a vanquished sorcerer is rising again. With the help of a wannabe-hero, a middle-aged princess, and a few bumbling wizards, Skarper must fight to save their world.

In Goblins, our main character is Skarper, but he's different from the other goblins. He taught himself to read the scribbles in the books in their castle and cannot seem to help but interrupt his own king. In turn, this incident leads to him being launched from a catapult from his own home and left for dead. Our other main character is Henwyn, the son of a cheesemaker but not cut out to take over the business. Instead, Henwyn wants to be an adventurer and he gets his chance to be a hero when a cheese monster comes to attack the town. Unfortunately, things do not go well and no one believes what he saw, leading to his banishment from the town.

Skarper and Henwyn end up meeting and suddenly find themselves entangled in an adventure, one involving a middle aged princess, some dimwitted wizards and a growing evil that could mean the end of Clovenstone. Whether he likes it or not, Skarper will have to face the Goblins again and return to his home to help stop evil from rising again. I do love the lack of love interest in this story and that the princess goes by Ned. She is not completely useless, although her strength does not come from the usually venue and helps save the day in a more pragmatic fashion.

The adventure in this book compelled me to keep reading and I loved the quirky, odd characters throughout the story. I never though I'd enjoy a book with a goblin as one of the main characters, but I grew to love Skarper, especially with his flaws. In fact, all of the characters have their flaws and weird habits in this book, making it pull apart from the usual adventure story.

Final Verdict: Goblins proved to be a quirky and fun read, filled with magic, goblins and an odd assortment of other heroes.

One response to “Book Review: Goblins”