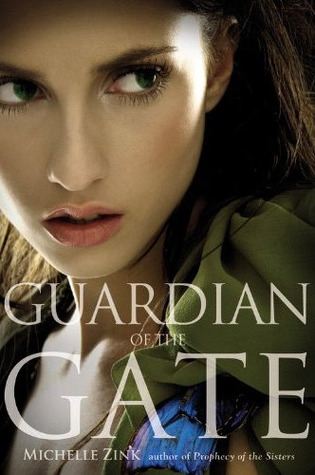 Guardian of the Gate by Michelle Zink
Series: Prophecy of the Sisters #2
Published by Little Brown Books for Young Readers on August 1st 2010
Pages: 352
Goodreads

The second novel in the Prophecy of the Sisters series is everything and more than what I was hoping. The magic that Zink created in her first novel is again presented in Guardian of the Gate.

In this installment, Lia is on a journey. She must find that which has been lost in order to fulfill her place in the Prophecy. However, along the way, friendships and relationships are tested as Lia learns that the only true person that she may be able to trust is herself.

Like the previous novel in the series, Guardian of the Gate completely held me hostage. I quite literally sat down with the novel, and probably did not move until I turned the last page. Zink's writing ability is phenomenal in capturing the essence of hope, love, and even betrayal. The world that has been created is beautifully explored, and so deep that, like Lia, I feel as if I know every nook and cranny.

I must admit that Zink surprised me quite a bit with this novel, especially in regards to the romance aspect. While Prophecy of the Sisters did include a sweet romance between Lia and James, the romance in Guardian of the Gate was a lot more mature. I do not want to spoil the awesomeness of Lia's romance, so you will just have to dive right into it just like I did.

While it is going to be torture awaiting the third and final installment, I could not be happier with this series. It has so much to offer to its readers. If you have not read the first novel in the series, Prophecy of the Sisters, I recommend that you fix that immediately. And once you have that finished, I can promise you that you will be dying to get your hands on Guardian of the Gate.

5 responses to “Book Review: Guardian of the Gate”