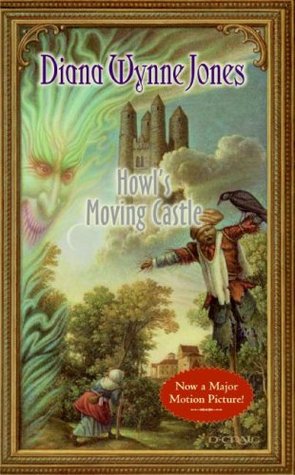 In the land of Ingary, such things as spells, invisible cloaks, and seven-league boots were everyday things. The Witch of the Waste was another matter.

After fifty years of quiet, it was rumored that the Witch was about to terrorize the country again. So when a moving black castle, blowing dark smoke from its four thin turrets, appeared on the horizon, everyone thought it was the Witch. The castle, however, belonged to Wizard Howl, who, it was said, liked to suck the souls of young girls.

The Hatter sisters —Sophie, Lettie, and Martha —and all the other girls were warned not to venture into the streets alone. But that was only the beginning.

In this giant jigsaw puzzle of a fantasy, people and things are never quite what they seem. Destinies are intertwined, identities exchanged, lovers confused. The Witch has placed a spell on Howl. Does the clue to breaking it lie in a famous poem? And what will happen to Sophie Hatter when she enters Howl's castle?

Diana Wynne Jones's entrancing fantasy is filled with surprises at every turn, but when the final stormy duel between the Witch and the Wizard is finished, all the pieces fall magically into place.

When I heard that the amazing Diana Wynne Jones had passed, I decided it was time to read the books I had been meaning to for some time. And this was one of them. I loved the animated movie and figured the book would be even better. Sophie is definitely not the luckiest girl. In fact, she doesn't seem all that mad when she gets turned into an old woman. Then she ends up in the incredible moving castle of Howl, a supposedly evil wizard who steals away and kills young maidens. But there's more behind Howl and the reason his castle is floating. I really can't say too much about this plot other than it is absolutely magical. I just loved it.

Howl is possibly the most interesting character I've read in a long time. He's quirky and moody and seems not all together there. Sophie herself makes an interesting old woman and it's her voice that we view the book through. I just love all of Jones' characters. They're so unique and wonderful, even the bad ones. Fans of high fantasy with well-developed characters will be begging for more of her books after reading this one. For such a long book it read rather fast as well.

Cover Commentary: There's so many covers of this book, it's insane. I really quite like the one I have. It's a bit brighter than some of the others. Not sure if that's how I quite pictured the castle though.