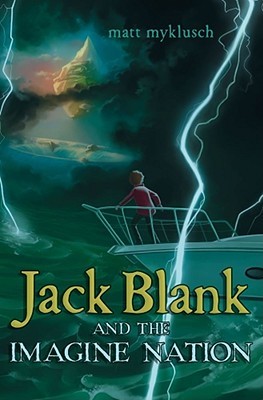 All Jack Blank knows is his bleak, dreary life at St. Barnaby’s Home for the Hopeless, Abandoned, Forgotten, and Lost, an orphanage that sinks further into the swampland of New Jersey with each passing year. His aptitude tests predict that he will spend a long, unhappy career as a toilet brush cleaner. His only chance at escape comes through the comic books donated years ago to the orphanage that he secretly reads in the dark corners of the library. Everything changes one icy gray morning when Jack receives two visitors that alter his life forever. The first is a deadly robot straight out of one of his comic books that tries its best to blow him up. The second is an emissary from a secret country called the Imagine Nation, an astonishing place where all the fantastic and unbelievable things in our world originate - including Jack. Jack soon discovers that he has an amazing ability--one that could make him the savior of the Imagine Nation and the world beyond, or the biggest threat they've ever faced.

From the first pages, I fell in love with Jack Blank And The Imagine Nation. The tale is comprised of young Jack. A child who knows next to nothing about this family or about what the future holds for him. His only joy in life currently lies in the hands of a hidden stash of forbidden comic books. In these books, he is able to imagine that life is not confined to the drab walls of St. Barnaby’s Home for the Hopeless, Abandoned, Forgotten, and Lost. A place that delights in dashing Jack's hopes and dreams. A place whose motto is "Crushing the Spirit of Childhoods Since 1898." While Jack knows that there is not much that he can do to escape this horror, it seems that a tiny little island nation, the Imagine Nation, has other plans in store for him.

Jack's story has the most humble of beginnings. A young boy in an orphanage who, by this society's standards, is inferior. His appearance… his standardized testings, all of it are below normal. Yet despite being told what he should be able to do, Jack does not listen. He believes that life has more in store for him than just St. Barnaby’s. And it does… just not the way Jack thought.

Jack Blank And The Imagine Nation is a visual wonderland. From the fantastic characters to the out of this world adventure, readers of all ages will find something in this delightful novel to enjoy.

5 responses to “Book Review: Jack Blank And The Imagine Nation”