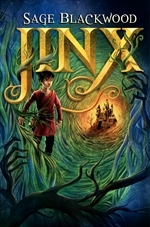 In the Urwald, you don’t step off the path. Trolls, werewolves, and butter-churn riding witches lurk amid the clawing branches, eager to swoop up the unwary. Jinx has always feared leaving the path—then he meets the wizard Simon Magus.

Jinx knows that wizards are evil. But Simon’s kitchen is cozy, and he seems cranky rather than wicked. Staying with him appears to be Jinx’s safest, and perhaps only, option. As Jinx’s curiosity about magic grows, he learns to listen to the trees as closely as he does to Simon’s unusual visitors. The more Jinx discovers, the more determined he becomes to explore beyond the security of well-trod paths. But in the Urwald, a little healthy fear is never out of place, for magic—and magicians—can be as dangerous as the forest, and soon Jinx must decide which is the greater threat.

Sage Blackwood introduces a daring new hero for an innovative new world as Jinx is joined by friends, battles enemies, and discovers life beyond—and even within—the forest is more complex than he can imagine, and that the Urwald itself needs him more than he could ever guess.

Jinx is a boy who has an unfortunate life in a town bordered by the Urwald, which has trolls and all sorts of other bad things lurking. When his uncle takes him to abandon him in the forest, they come across a magician named Simon Magus. Sensing that the boy is in danger, he offers the uncle a penny for the boy and then turns the trolls on him.

And so the story starts, Jinx becoming apart of Simon's household and then becoming intrigued by magic himself. I loved all aspects of this book. Jinx's character was curious and gained a strength throughout the book that really made him quite an interesting character. Simon is haphazardous at times and for it he seems less powerful than he really is. Even more interesting is his wife, who seems to appear out of nowhere and leaves just as suddenly.

The Urwald is an interesting setting to explore and I love when Jinx dives into the depths of it, with the help of two companions. The world itself really lent towards an engaging story about a boy discovering a world of magic and the magic inside himself. I really enjoyed this book in all of its aspect. The characters were so interesting and different, the world building was awesome and left a lot for exploration as well as a plot that carried the reader until the very end of the book.

Final Verdict: I am looking forward to the next volume and cannot wait to see what adventures Jinx has ahead for him. A great first novel that leaves a lot left to be explored.