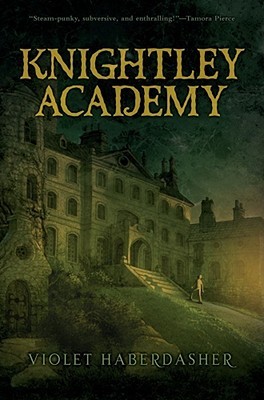 Henry Grim has never been in trouble for borrowing a sword from the headmaster's private stores. He has never discovered a forbidden room in a foreign castle, or received a death threat over breakfast.

All Henry knows is life as an orphaned servant boy at the Midsummer School, bullied by the privileged sons of aristocracy. But all that changes when Henry is the first commoner to pass the entrance exam for the prestigious Knightley Academy, where he will be trained as a modern-day knight alongside the cleverest and bravest fourteen-year-olds in the country.

Henry and his roommates, two other students from decidedly un-Knightley backgrounds, are not exactly greeted with open arms by their classmates. In fact, it soon becomes apparent that someone is going to great lengths to sabotage the trio's chances at becoming knights. But Henry soon learns that there is more at stake than his future at Knightley, and only he can sound the alarm. Is anyone going to believe a former servant on the brink of expulsion?

Brimming with wry humor, page-turning suspense, and surprising twists, this first adventure in a memorable new series is sure to enthrall readers of all ages.

Let's just say that I think it rivals that of Harry Potter. It has that same friendship interaction, forms of bullying, and the underlying evil plot that will hopefully bring everyone together by the end of the series. I think this is the next big thing. It's epic enough, involving enough and it has the diversity that every series needs. I have a big thing for underdogs getting what they deserve in life and this book is it.

Definitely check this book out if you want nearly 500 pages of engaging YA literature that will keep you thinking for days.

I said this a bit up there a bit – but the characters are diverse and they're underdogs. I really enjoyed how well they teamed up and got along, helping each other out of sticky situations. Definitely characters I want to get to know and root for throughout this series.

Final Verdict: If you've been an underdog, felt like one, or just really like rooting for them – you'll love this book. OR if you have a fascination with Knights… 😀