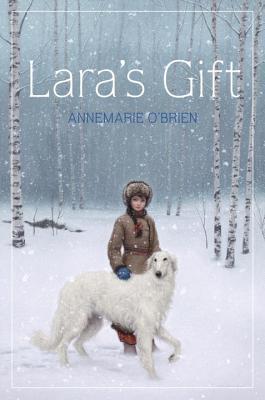 Young Lara is being groomed in the family tradition to take over as Count Voronstov's next kennel steward, breeding borzoi dogs worthy of the Tsar. But then Lara's baby brother is born and she finds herself supplanted as her father decides to make her brother the next kennel steward. Going against her father's wishes and becoming increasingly sure of her special gift of understanding these incredible dogs, Lara risks everything when she reveals the truth about her visions. Now she must save Zar, her favorite borzoi and the one she raised from birth, from a hungry pack of wolves. Only then can she find her own, extraordinary destiny. . . .

Lara's Gift is a beautiful mix of fantasy and historical fiction, set in a time period that I love – tsarist Russia in 1914. Lara dreams of becoming the next kennel steward, breading the beautiful borzoi dogs. Being the only child, she feels like her future is set in stone, until her mother births a baby brother. Suddenly, she must learn womanly duties and spend less time with her beloved dogs.

Lara knows she is supposed to be with the dogs, as all of her visions of the future have to do with them. Unfortunately, this topic is one her father will not discuss and he tells her to get rid of the visions. With the guilt of still having this visions, Lara tries to suppres them, but a vision that may mean the dogs may be in danger, including her favorite Zar, who she raised from a pup has her running to help.

I loved Lara's strength of character and acceptance of Alexander of her belonging with the dogs even though it was usually a position a man held. The story was an intense and moving one, set in a time that I love in history.

Final Verdict: Lara's Gift was a wonderful tale of a girl's love for dogs and the visions that helped her aide them.