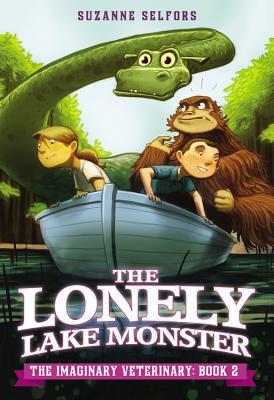 Pearl doesn't mean to be a troublemaker. Trouble just seems to find her.

Pearl Petal and Ben Silverstein can't wait for their first official day as apprentices of Dr. Woo, veterinarian for imaginary creatures. That is, until they are tasked with clipping the sasquatch's toenails. Gross!

Then Pearl spots a monster in the lake behind the hospital. Even though they were told not to leave the building for any reason, Pearl sets off for a closer look, with Ben trailing cautiously behind.

The outing goes awry when Ben is captured by the creature and held hostage on an island in the middle of the lake. It's up to Pearl to hatch a rescue mission. Will she save the day or cement her reputation as the town troublemaker? And will the hospital's secret patient be able to help?

Suzanne Selfors takes readers on an incredible adventure full of mythical creatures and astonishing discoveries that are anything but imaginary.

Following directly after the first book, The Lonely Lake Monster find Ben and Pearl as assistants to Dr. Woo, the vet for extraordinary creatures. This book is from Pearl's point of view, which was a nice change from the first book, which was from Ben's point of view. Selfors does a great job of summing up the series so far in an easy to understand and pick up this book out of order. In this book, Pearl manages to get in big trouble. Ben becomes captured by the lake monster and Pearl must figure out how to get him away from the monster without jeopardizing their assistant positions.

The best plan Pearl comes up with involves a sick leprechaun, who may or may not be willing to help her. I found this plot to be a step up from the previous novel in ways. I like the way the pair dodges the curious Mrs. Mulberry and her daughter, who keep nosing around the hospital.

I like the way we see Pearl grow a little in this book, as she finds that her first approach is not always the best. Ben is the more cautious of the two, but is curious enough to follow Pearl into some interesting situations. I do love that it is Ben that gets captured and needs saving.

Final Verdict: A solid second book, The Lonely Lake Monster finds a new adventure with more fantastical creatures and problems to be solved.