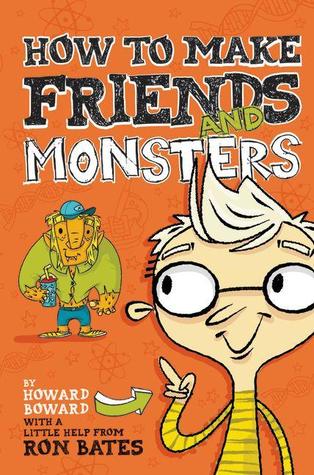 How to Make Friends and Monsters by Ron Bates
Published by Zondervan on July 23rd 2013
Pages: 347
Buy on Amazon
Goodreads

Howard Boward, a 13-year-old boy-genius with a chip on his shoulder is too smart for his own good. He has troubles making friends---possibly because he complains so much. Until one day a science experiment goes haywire, and Howard creates a best friend for himself---Franklin---who also happens to be a monster. Creating Franklin was an accident, not like Howard was playing God or anything---or so Howard tells himself. Franklin and Howard are having so much fun, Howard decides to create more 'friends, ' using DNA from kids at school. Only, these friends aren't quite as friendly.

Soon there's a major mess and Howard has to sort it all out before the monsters destroy their human counterparts. But terminating the monsters proves harder than he imagined. They didn't choose to be monsters; they can't go against their innate nature. Howard finds himself facing consequences for playing God. Getting rid of the monsters means learning to tame his own inner beast, and Howard begins to understand the meaning of free will and true friendship.

In How to Make Friends and Monsters, Howard is your typical geeky character, unable to make friends and more interested in science than anything else. So, when his mother buys him a book about making friends, he takes it literally and decides it is time he made himself a friend. Needing to find some DNA to help with his project, he starts to consider the kids at his school. Although the popular students are popular, he finds that they may not make the best friend for him. Using some hair from local animals that his father works with, some of the popular kids from school, and that of a girl named Winnie (who seems pretty cool…), he creates Franklin Stein, who seems to be the perfect friend.

Not only is Franklin popular, athletic and easy to get along with, he seems to care for Howard and acts like a true and loyal friend. The only problem is, that as Howard and Franklin become more popular, he starts to see Franklin as a pain and starts to not want to hang out with him. Franklin disappears after Howard has left him behind and treated him in the worst way. It's then when the popular kids figure out how to use Howard – to make their own friends.

The problem is, their monsters do not turn out to be as great as Franklin and cause a lot of problems. Howard is eating up his sudden popularity and seems to push aside the help that Winnie, Franklin and even his nerdy neighbor Reynolds offer him. Howard learns a deep lesson in what it is like to be a true friend as this book goes on.

I really like Howard as a flawed character. He suddenly has everything he wants and thinks he can just get rid of his true friends to become even more popular. Luckily, his true friends are more forgiving and caring and accept his faults and problems.

Final Verdict: How to Make Friends and Monsters is a humorous way with fantastical elements that reveals what it takes to make a friendship truly work. I think a lot of my students would get a kick out of this book.