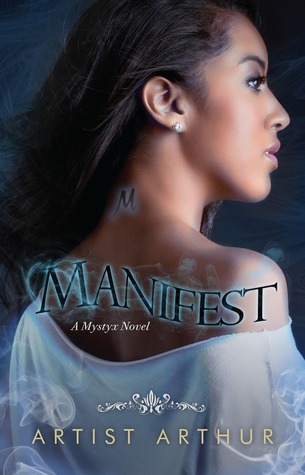 When fifteen-year-old Krystal Bentley moves to Lincoln, Connecticut, her mom's hometown, she assumes her biggest drama will be adjusting to the burbs after living in New York City.

But Lincoln is nothing like Krystal imagined. The weirdness begins when Ricky Watson starts confiding in her. He's cute, funny, a good listener—and everything she'd ever want—except that he was killed nearly a year ago. Krystal's ghost-whispering talents soon lead other "freaks" to her door—Sasha, a rich girl who can literally disappear, and Jake, who moves objects with his mind. All three share a distinctive birthmark in the shape of an M and, fittingly, call themselves the Mystyx. They set out to learn what really happened to Ricky, only to realize that they aren't the only ones with mysterious powers. But if Krystal succeeds in finding out the truth about Ricky's death, will she lose him for good?

Here is where the book fell a little short for me. It felt a little cliche personally and I guess I really don't understand how you can fall in love with a ghost. But teens are teens and overall, it had a great supernatural feel to it, with a decent balance of growing friendships and a mystery to solve.

Probably the best part of the book were the characters. There was such diversity, we have the somewhat normal teen girl – our main character Krystal – who is knew and just sort of fits in. There's the popular annoying and mean girl, the good looking African American ghost, and then the boy from the other side of the tracks who has more responsibility at home than the two girls combined. I will probably read the rest of the books to get a closer look at the other two characters with special gifts.

Final Verdict: Definitely has a lot of teen issues in it – dealing with parents who aren't around, moving to a new place and school, feeling responsible for things out of your control… and most of all just trying to be yourself.