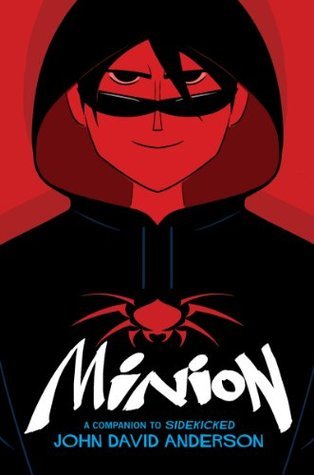 John David Anderson returns to the world of superheroes he created in Sidekicked with an entirely new cast of characters in Minion, a funny and emotional companion to his first breakout tween novel—perfect for superhero fans who also love the work of bestselling authors Rick Riordan, Louis Sachar, and Frank Cottrell Boyce.

Michael Morn might be a villain, but he's really not a bad guy. When you live in New Liberty, known across the country as the City without a Super, there are only two kinds of people, after all: those who turn to crime and those who suffer. Michael and his adoptive father spend their days building boxes—special devices with mysterious abilities—which they sell to the mob at a price. They provide for each other, they look out for each other, and they'd never betray each other.

But then a Super comes to town, and Michael's world is thrown into disarray. The Comet could destroy everything Michael and his dad have built, the safe and secure life they've made for themselves. And now Michael and his father face a choice: to hold tight to their life or to let it unravel.

After loving Sidekicked, I could not wait to get my hands on Minion. I love the author’s take on superheroes, giving it one of the more realistic twists when it comes to middle grade fiction. Minion is the story of Michael, who never felt wanted until he met his dad. Just because his dad creates special boxes for the local mob boss doesn’t mean he is completely evil, but it definitely complicates things. Michael has his own powers as well, he can manipulate people with his mind. It’s a skill his adopted father has warned him not to tell anyone about. He can’t resist telling his only friend, who can create spikes like a porcupine and works as an underling for the mob.

When a girl at the mall actually talks to him, he cannot stop thinking about her and actually runs into her more than once. He cannot believe his good luck and finds himself going out of his way to spend time with her. Unfortunately, it’s at this time that a new super-villain enters town with a flying hero in tow – who the town calls The Comet. Michael finds his world turned upside down and his father starts to talk about leaving town and leaving their life behind just when Michael starts to reach out and find a new friend.

I enjoyed Michael’s interactions with his adopted father, you can tell that although he sells his inventions to the mob, he’s really not a villian persay. The questions he poses to Michael and the way he says things really shows depth in his character and I think Michael’s adoration for him really comes from those close moments and conversations together.

Minion is a book about how there is a thin line between good and evil and what makes a hero or a villain. The only disappointing part of the book was finding out about Michael’s real past and a lack of strong female characters beyond Viola, unlike in the first book. I like the complexity of the characters that we meet in this book, from the lead to even the minor characters. There are lots of serious moments and only so much action (towards the end).

A strong companion to Sidekicked, this is a book for those who enjoy superhero stories and even those who do not.