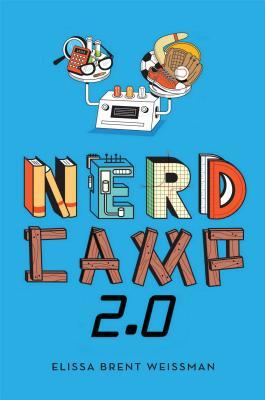 Gabe’s happily headed back to Nerd Camp—but can he handle a cool-kid invasion?

For Gabe, the equation for ideal summer bliss equals six glorious weeks of vigorous learning immersion at the Summer Center for Gifted Enrichment—aka, Nerd Camp. Last year was amazing, and this summer will be even better.

At least, that’s what Gabe thinks until a new variable is introduced: Zack, Gabe’s cool stepbrother, was supposed to attend a camp nearby, but in the aftermath of a recent wildfire, Zack’s camp and nerd camp will be sharing territory. As these two very different worlds collide, will both camps—and both stepbrothers—survive the summer?

Not having read the first book, Nerd Camp 2.0 was a complete and wonderful story, with enough background given at the beginning of the book to make reading it enjoyable. Gabe and Zack have only been stepbrothers for about a year, Gabe is the nerdy smart boy and Zack is the cool kid and both are hoping to go to summer camp. When a rash of wild fires strike, they are worried their summer camp may be canceled.

Neither are cancelled, but they are going to be sharing the same campground, which makes both boys nervous. Gabe attends a gifted camp where they research and learn all summer and Zack is into sports and other recreational activities. For different reasons, each of them is nervous about both camps sharing one grounds and for good reason. Putting cool kids and nerdy kids together is a disaster and starts a war between the two camps that the two stepbrothers will have to figure out a way to diffuse.

I really loved that Nerd Camp 2.0 was told from alternating points of view, seeing the issues and dilemmas through the eyes of two very different boys. I love the way they interacted and the resolution they came up with to bring the war to a halt. With summer coming up, this is a great book for both boys and girls alike with a strong message about how to negotiate and get along with others that are different from you.

Thanks to the publisher and Blue Slip Media, one winner will win this prize pack below.

Fill out the Rafflecopter below to enter.