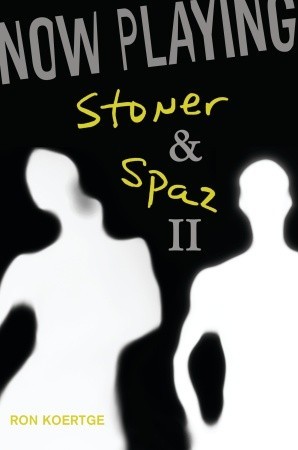 Beautiful but troubled Colleen Minou is the only girl who ever looked at Ben Bancroft as more than a spaz— more than just that kid with cerebral palsy. Yet the more time Ben spends with her, the more glaring their differences appear. Is what Ben feels for Colleen actual affection, or more like gratitude? Then there’s Amy (aka A.J.), who is everything Colleen isn’t, and everything Ben’s grandma wants for him: clean-cut and upper-class, academically driven, just as obsessed with filmmaking as Ben is. But what does A.J. see when she looks at Ben? CP? Or the person behind the twisted body? In Ron Koertge’s sharp, darkly humorous follow-up to the award-winning Stoner & Spaz, Ben tries to come to terms with his confused feelings toward A.J. and his inimitable connection to Colleen, who is sometimes out of it, sometimes into him, and always exhilarating.

I absolutely adored Stoner & Spaz and couldn't wait to get to know A.J. a little better, because as much as Colleen has shown Ben things he never thought he'd see, she is still quite a bit crazy (and full of drugs). I was glad I didn't have to wait after reading the first because I think these characters would stick with me forever and I wanted to know more of their story.
I have to say, this book is deeper than you'd think at first glance. Especially if you are going by the title. It's interesting to see Ben unraveled a bit further. Questioning his love for Colleen when he has the opportunity to spend more time with A.J. who has similar interests. I love how flawed all the characters are in this book. Even Ben, who has enough physical flaws has these deep rooted flaws that show how human he is, how exactly like a teenage boy he can be.
I think between Ben and Colleen, Colleen intrigues me the most. I want to open her head up and see why she does what she does. Why she chose Ben, why she tries to do right by him and help him when he least expects it. She's brutal and open and definitely the type of girl to straight talk when needed and to coddle when needed.
The only thing I disliked in the book was the ending. It didn't wrap anything up. I guess the first one didn't either, but still, it feels so open and there's so much more to explore. These books will definitely pull emotion out of the reader, make them cheer at times, feel upset at others.
Final Verdict:
These books are amazing. I think it puts a light on drugs that really shows how they can mess you up and make you a different person. How difficult it is to stop once you've done it for so long and what that means. There's so many other issues in this book that really draw out emotion. I definitely suggest it to those who want something different, who want to care for the characters and really get to know them.