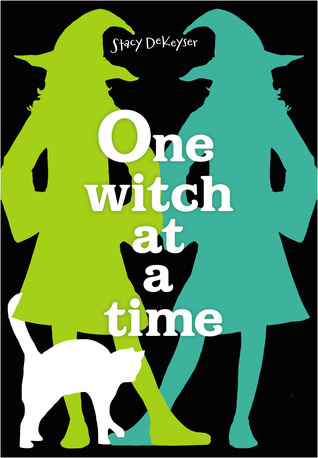 One Witch at a Time by Stacy DeKeyser
Published by Simon & Schuster Books on February 10th 2015
Pages: 208
Goodreads

Magic beans quickly lead to danger in this standalone companion to The Brixen Witch, which Kirkus Reviews called “fresh and satisfying” in a starred review.

When Rudi Bauer sets out for town one morning to trade, he never dreams that Susanna Louisa will sell his family’s cow—for magic beans, no less! But that’s exactly what she does, and the consequences will be disastrous unless Rudi can return the magic beans to their rightful owner, the evil witch of Petz. The journey to Petz is long and hard, but Rudi and Susanna Louisa soon find a shortcut: a magically sprouted beanstalk leads them straight there...and straight into danger. Because the evil witch of Petz is a terrible giant who has locked away summer and keeps his kingdom a frozen wasteland. And in order to defeat him, Rudi is going to need a little magic of his own.

One Witch at a Time takes the tale of Jack and the Beanstalk to a new level. Rudi sets out to town and finds that his friend Susanne has promised a strange girl his cow in exchange for handful of supposedly magic beans. He’s worried that the girl will cash in on one of their few cows and heads back, with magic beans and Susanne in toe. Rudi references the previous book that deals with a Pied Piper retelling and how he saved the town, making him more aware of the possibility of magic. Even so, Rudi doesn’t trust these beans are magic, until his grandmother tells him to check with their town witch.

Rudi and Susanne end up on an adventure that risks the lives of themselves and all those around them. Agatha is a strong-headed girl from the land that the beanstalks lead to called Petz. She has stolen from the giant witch who rules in a large castle and is troll-like. She cannot help but want to stop his evil ways from making her people suffer. Although Rudi must do the right thing by returning the beans to their rightful place in the giant’s castle, he knows he must also help Agatha.

I love the balance of magic talk that the Brixen Witch has with Rudi and how the story molds around the idea that even if magic is used, there’s a balance for it. I enjoyed the adventure and the characters’ interactions with one another. One Witch at a Time definitely a book I would recommend to my students that love fairy tales.

A fun retelling of Jack and the Beanstalk with some interesting twists and characters thrown in to make it more original.

3 responses to “Book Review: One Witch at a Time”