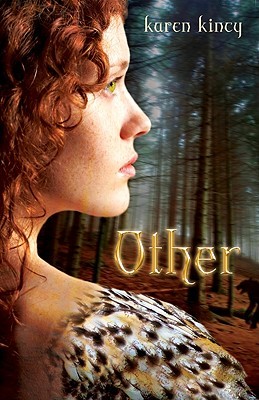 Other by Karen Kincy
Series: Other #1
Published by Flux Books on July 1st 2010
Pages: 336
Goodreads

Seventeen-year-old Gwen hides a dangerous secret: she’s Other. Half-pooka, to be exact, thanks to the father she never met. Most Americans don’t exactly roll out the welcome mat for Others, especially not the small-town folks of Klikamuks, Washington. As if this isn’t bad enough, Gwen’s on the brink of revealing her true identity to her long-time boyfriend, Zack, but she’s scared he’ll lump her with the likes of bloodthirsty vampires and feral werewolves.

When a pack of werewolves chooses the national forest behind Gwen’s home as their new territory, the tensions in Klikamuks escalate-into murder. It soon becomes clear a serial killer is methodically slaying Others. The police turn a blind eye, leaving Gwen to find the killer before the killer finds her. As she hunts for clues, she uncovers more Others living nearby than she ever expected. Like Tavian, a sexy Japanese fox-spirit who rivals Zack and challenges her to embrace her Otherness. Gwen must struggle with her own conflicted identity, learn who she can trust, and-most importantly-stay alive.

Other is a remarkable debut novel featuring an amazing mystery who-done-it style. Add in a wide variety of paranormal creatures, and I was hooked. Gwen is an Other, but not what you might expect. She is half human / half pooka. Living in a society that does not understand or accept Others, Gwen is forced to find support where she can. So when Others begin to mysteriously show up dead, Gwen is hot on the case.

One aspect of the book that completely took me by surprise was the usage of other paranormal creatures. Within Other, vampires and werewolves are not glorified as they normally are in other novels. Here, they are basically the bad guys. Personally, I loved this idea. And was enthralled with being able to be introduced to paranormal creatures that I have had little to no experience with in the past.

All in all, Other was an amazing novel that captured my attention, and kept me on the edge of my seat. With Kincy's eye for details and fantastic characters, I flew through this novel in a matter of hours. I just did not want to leave the magical world that Kincy had created. For those of you who enjoy magical creatures, Other is a novel that is not to be missed.

6 responses to “Book Review: Other”