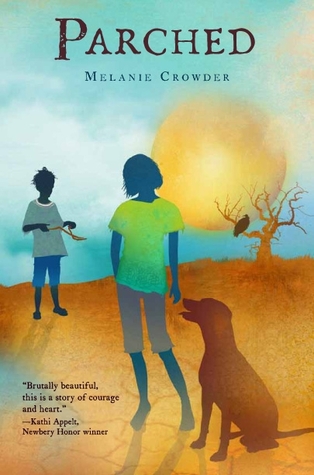 A mesmerizing debut about a girl, a boy, and a dog struggling to survive in a parched and barren land.

Sarel is a girl with secrets. She knows which tree roots reach down deep to pools of precious water. But now she must learn how to keep herself and her dogs alive. Nandi is the leader of those dogs. She knows they can’t last long without water—and she knows, too, that a boy is coming; a boy with the water song inside him.

Musa is that boy. His talent for finding water got him kidnapped by brutal men, yet he's escaped, running away across the thirsty land that nearly claims his life. And so Sarel, Musa, and the dogs come together in what might be their last hope of survival.

Parched is a book that took me by surprise. Told from the point of view of a girl named Sarel, a boy named Musa, and also Nandi, a dog, it's set in a desert setting where the water has dried up and gangs are willing to kill for any source of water. Parched opens to such a scene, Sarel's parents being killed and Sarel herself escaping with the help of the dogs, especially Nandi. Her source of water is running out and her mother's garden was destroyed in the struggle and resulting fire, giving her little food. Not wanting to leave, she tries to make the best of her situation.

Musa is a boy who can seek water, he learned from his mother but has a magical sense and can hear the water. He was taken from his family by a gang and lives in change, only let out to help find water. When they reach another gang's territory to look for water, things go south and he is able to run away and find his freedom, searching out water on the way. It's this sense that brings him to Sarel and her dogs, who is weary of him at best. Together, they must find their future, along with enough food and water to survive.

Sensing a deep lake, Musa hides his talent at first from Sarel, not trusting her and worried over being taken advantage of again. It takes time for him to warm up and show Sarel his talent and how it can help them. Unfortunately it looks as though the gang is looking for Musa and they will have to defend themselves with nothing but dogs and themselves.

I was blown away by this book, which really had a overlying hunger and thirst held over this area. I felt for Musa and Sarel throughout the book and found myself rooting for the two to find the source of water that could change everything. There's a certain terror in dystopian books, the gangs that take over and do as they feel to get by and using others in horrific ways to do so.

Final Verdict: Parched was a quick and powerful read that really looked at what would happen if water was scarce.