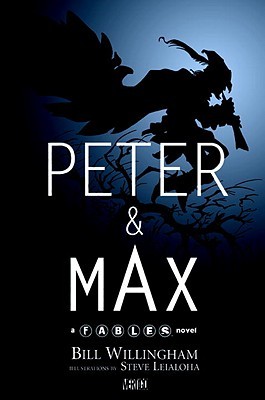 This story stars Peter Piper and his incorrigible brother Max in a tale about jealousy, betrayal and revenge. Set in two distinct time periods, prepare to travel back to medieval times and learn the tragic back-story of the Piper family, a medieval-era family of traveling minstrels. Then, jump into the present to follow a tale of espionage as Peter Piper slowly hunts down his evil brother for a heinous crime, pitting Peter's talents as a master thief against Max's dark magical powers.

Based on the long-running and award-winning comic book series FABLES, PETER AND MAX is its own tale. Readers don't have to be familiar with the comics to fully enjoy and understand this book.

The real question is why in heck did it take me so long to get around to reading this one??? My uncle bought it for me for Christmas last year and I have no idea why I didn't read it the next day. I absolutely love the Fables graphic novel series and was excited that there was an actual YA novel set in the same universe. I also love fairy tale retellings. 🙂

Amazing. Mind-blowing. Heart-stopping. Let's just say that this book certainly takes you for a ride. It's definitely upper YA. There's some serious gore and evilness in this book that I wouldn't recommend to middle school-ers. I loved it all the same. It basically follows the Piper brothers. Peter is the one who is good and he has a magical flute his father handed down to him. His older brother Max slowly transforms from a selfish boy into a horrible, evil magician who leads children astray from villages, attacks whoever he feels like and is set out to kill Peter once and for all and take back what he believes to be rightfully his – the flute that was handed down to Peter.

I love that it is set in two time periods. We get to see two worlds at once and a glimpse and curiosity as to why Bo Peep is disabled and how Max has been around for so long. The dual time-line really made this book better than it already was.

Peter definitely is not the perfect child, but he acts out of love where his brother Max acts out of hatred. I can understand Peter a bit because I was the younger sister that was better at certain things than my older sister, just as Peter was better at playing than Max. I love seeing Peter as a child and as a man, you can definitely see how he has grown and how his experiences have shaped who he is.

Max really is evil. He has washed away any good he once had in him by all the evil deeds he has done. I love his character because he so good at being bad.

Final Verdict: I think some of us can relate to sibling rivalry if we have sisters or brothers. This is a bit of an extreme form of it, but there's something to the emotion that first sparks Max's anger and his hatred that we sometimes can see in ourselves.

8 responses to “Book Review: Peter and Max: A Fables Novel”