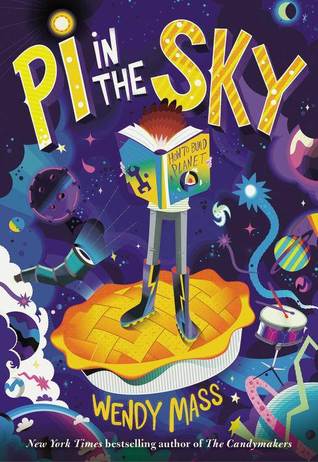 Pi in the Sky by Wendy Mass
Published by Little Brown Books for Young Readers on June 11th 2013
Pages: 244
Buy on Amazon
Goodreads

Joss is the seventh son of the Supreme Overlord of the Universe. His older brothers help his dad rule the cosmos, but all Joss gets to do is deliver pies. That's right: pies. Of course, these pies actually hold the secrets of the universe between their buttery crusts, but they're still pies.

Joss is happy to let his older brothers shine. He has plenty to keep his hands full: attempting to improve his bowling score; listening to his best friend, Kal, try (and fail) to play the drums; and exploring his ever-changing home, The Realms. But when Earth suddenly disappears, Joss is tasked with the seemingly impossible job of bringing it back. With the help of Annika, an outspoken girl from Earth, he embarks on the adventure of a lifetime...and learns that the universe is an even stranger place than he'd imagined.

Pi in the Sky is science fiction story about Joss, the seventh son of the Supreme Overlord of the Universe. When a human girl gets a glimpse of where they live, his father decides to take Earth out of the timeline. Joss's only friend Kal disappears because his parents were on Earth and therefore he cannot exist anymore. Instead, the human girl Annika shows up in his place and thinks she is in a dream. It becomes Joss' job to make sure that she remains thinking she is in a dream so that she won't become nonexistant.

Joss' job is to bring pies around the universe, a job that he thinks as unimportant. By the end of the story, the importance of these pies is revealed and how much Joss really does matter. I love the banter and relationship that builds between him and Annika. Together, they must figure out a way to rebuild Earth so that all can return to normal, all without alerting his own father to what they are planning.

The intricate details that Mass puts into her books really pulls them into the reader's heart and although it was a science fiction book with aliens, I felt the real plot shine through. What matters is self-importance, finding oneself and loving others. I really think readers of all genres will enjoy this book. The only thing that would hold them back is some of the heavier science that comes into play later on in the book.

Final Verdict: Pi in the Sky was a wonderful book about what it is to be human and to be yourself. I loved the science aspects as well as well as the otherworldly setting.

One response to “Book Review: Pi in the Sky”