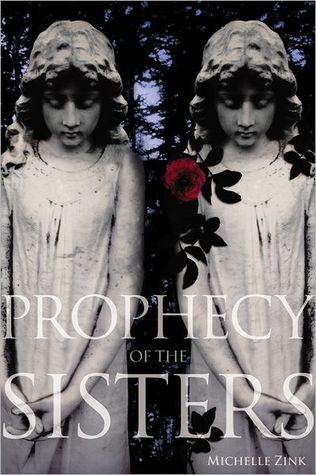 Sixteen-year-old Lia Milthorpe and her twin sister Alice have just become orphans, and, as Lia discovers, they have also become enemies. The twins are part of an ancient prophecy that has turned generations of sisters against each other. To escape from a dark fate and to remain in the arms of her beloved boyfriend James, Lia must end the prophecy before her sister does. Only then will she understand the mysterious circumstances of her parents' deaths, the true meaning of the strange mark branded on her wrist, and the lengths to which her sister will go to defeat her. Debut novelist Michelle Zink takes readers on an unforgettable journey where one sister's fateful decision could have an impact of Biblical proportions. Prophecy of the Sisters is the first of three books.

Lia believes that she has led a fairly normal life. She had a mother and father who loved each other passionately. A brother whom she doted on. And a twin sister she felt like she could share any and everything with… that is until her father suddenly dies. Now Lia's world is completely upside down. Her sister suddenly becomes mean and distant… and there is this talk of a Prophecy. But what part her and her twin play in this mysterious Prophecy will only be unveiled as they dig deeper into their family's past.

Prophecy of the Sisters was a book that quite literally sat in waiting for months on my shelves. As the months passed by after its release, I began to hear wonderful comments about the novel. Unfortunately, it continued to sit in waiting due to it personally not being the right time for the novel. After eyeing Prophecy of the Sisters for so long, I began to feel drawn to it. Like something was beginning to say that "Now is the time… Read me." And that is exactly what I did… whole heartedly.

Prophecy of the Sisters and its author completely had me hooked. Every creepy and Gothic detail is perfectly detailed. The world… the characters… the premise of this novel are so enchanting that you will completely forget that you are reading. It consumes you until you can think of nothing but finishing this novel.

Rarely I find a novel that is so perfectly paced for me. The action, the mystery, and even the romance unfold beautifully. It seems that the novel never had a lull. It continuously kept me on the edge of my seat dying to see what would happen next. And completely left me breathless for the next installment.

If you enjoyed the Gemma Doyle series by Libba Bray, then Prophecy of the Sisters is a must read. It will leave you fearing things that go bump in the night and dying to know more about the Sisters and the Prophecy. Highly Recommended.

7 responses to “Book Review: Prophecy of the Sisters”