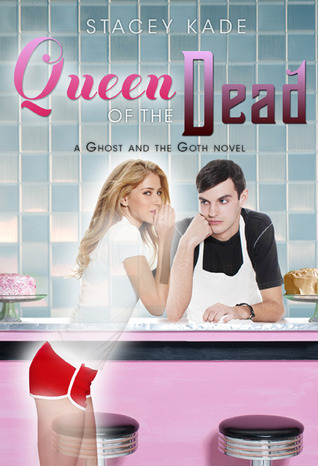 Queen of the Dead by Stacey Kade
Series: The Ghost and the Goth #2
Published by Hyperion on May 31st 2011
Pages: 266
Goodreads

After being sent back from the light, Alona Dare - former homecoming queen, current Queen of the Dead - finds herself doing something she never expected: working. Instead of spending days perfecting her tan by the pool (her typical summer routine when she was, you know, alive), Alona must now cater to the needs of other lost spirits. By her side for all of this - ugh - “helping of others” is Will Killian: social outcast, seer of the dead, and someone Alona cares about more than she’d like.

Before Alona can make a final ruling on Will’s “friend” or “more” status, though, she discovers trouble at home. Her mom is tossing out Alona’s most valuable possessions, and her dad is expecting a new daughter with his wicked wife. Is it possible her family is already moving on? Hello! She’s only been dead for two months! Thankfully, Alona knows just the guy who can put a stop to this mess.

Unfortunately for Alona, Will has other stuff on his mind, and Mina, a young (and beautiful) seer, is at the top of the list. She’s the first ghost-talker Will’s ever met—aside from his father—and she may hold answers to Will’s troubled past. But can she be trusted? Alona immediately puts a check mark in the “clearly not” column. But Will is - ahem - willing to find out, even if it means leaving a hurt and angry Alona to her own devices, which is never a good idea.

Packed with romance, lovable characters, and a killer cliffhanger, Queen of the Dead is the out-of-this-world sequel to The Ghost and the Goth.

I really enjoyed the first book and was interested to see where it was going in the second.

Well, there was definitely more action in this one. This book introduces a group of people that are similar to Will, but they may not be a perfect match to help him. The pace of this book was fast paced and it was a whirlwind of fun, romance, and some new intrigue added into the mix. I like the exploration back to Will interacting with his father and glimpsing a little into the future of Alona's parents without her.

I find Alona growing on me. Yeah, she can be selfish and mean and definitely is used to getting her way. There's also something more and I can't completely brush her off as a character I dislike.

Saying that, I like Will a lot more. Maybe because he's partly clueless (as most guys are), but also because he really is just trying to figure out how to deal with what life throws his way.

Mina is the girl I'd expect Will to fall for if there was no love interest with Alona. She's like him, somewhat cynical and has a bit of a family problem that really sums up a lot about how she's acts. But Alona is Will's dream girl, even if she's really only a ghost.

I think fans of paranormal and comedy will enjoy this combination. And I think the writing is just fantastic and really brings you into the story with the characters, which means virtually anyone can enjoy this book.

Cover Commentary: Not sure I love it, especially since there's not much time spent in the diner Will works in. But it's definitely close to how I pictured the characters.

2 responses to “Book Review: Queen of the Dead”