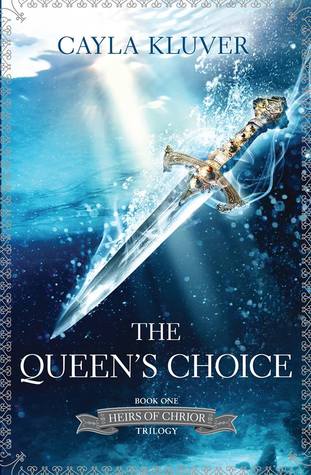 Magic was seeping out of me, black and agonizing. I could see it drifting away. The magic that would let me pass the Road to reach home again.

When sixteen-year-old Anya learns that her aunt, Queen of the Faerie Kingdom of Chrior, will soon die, her grief is equalled only by her despair for the future of the kingdom. Her young cousin, Illumina, is unfit to rule, and Anya is determined not to take up the queen's mantle herself.

Convinced that the only solution is to find Prince Zabriel, who long ago disappeared into the human realm of Warckum, and persuade him to take up his rightful crown, Anya journeys into the Warckum Territory to bring him home. But her journey is doomed to be more harrowing than she ever could have imagined.

The Queen's Choice is the first in a new series featuring faeries, romance and political intrigue. Anya is one of three cousins that may inherit the throne to Chrior, the faerie land separated from the human world by the Bloody Road. Only faeries can cross the road, as a huge bloody battle left its mark between the two species. When Anya finds out that her aunt and Queen of the Faeries has foreseen her death closing in, she is asked to take the throne. Anya is not the type of spirit that wants to be held to a throne and revels in her journeys to and from the human world. She accepts but when her unstable cousin Illumina, scarred by a horrible childhood is tasked with finding the missing, half human Prince to see his mother one last time, Anya cannot sit still.

Anya herself takes off into the human world only to have her wings severed from her body by human hunters and left for dead. A human family living deep in the forest finds her and takes her into their home to recover. There's something off about this family as they are very secretive, especially the father. They are living in hiding, having wronged the King of their land and if any of their family is found, they will have to serve their father's sentence. So when Shea, the oldest daughter stubbornly decides to leave with Anya to continue her quest, it's a bit rocky. The pair leaves on an adventure to find the Prince, Anya's cousin Illumina and find many more adventures on their path.

Although it took me a long time to read through to the end of the book, I found myself really enjoying the world that Kluver has built. Anya is a great female character in that she knows herself and her own desires. She leaves her beloved at home often and although she feels her love for him, she more strongly feels the urge of travel and adventure. Even after the loss of her wings, Anya despaired, but set to moving forward and completing her journey. I also loved Shea and honestly all of the characters in this book were so beautifully crafted. Each with their own weaknesses and strengths, making a cast that is very memorable.

My only complaint about this book is the ups and downs of the excitement. I felt at times the journey overly hashed out and could have been pushed forward a little faster. In turn, I think the extra time spent really gave an interaction between characters I may have missed otherwise. I'm on the fence about it. Overall, I really felt it was a long read and dragged at some parts, but the action and great characters really made up for that at the same time. The killer really was the twist at the end of the book, that I thought I saw coming but yet still surprised me.