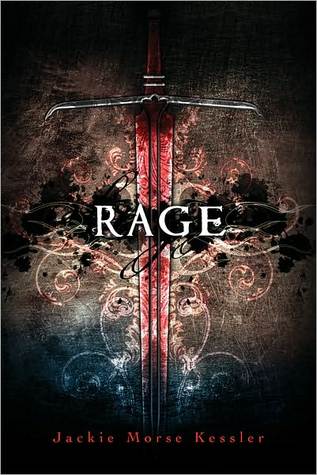 Missy didn’t mean to cut so deep. But after the party where she was humiliated in front of practically everyone in school, who could blame her for wanting some comfort? Sure, most people don’t find comfort in the touch of a razor blade, but Missy always was . . . different.

That’s why she was chosen to become one of the Four Horsemen of the Apocalypse: War. Now Missy wields a new kind of blade—a big, brutal sword that can cut down anyone and anything in her path. But it’s with this weapon in her hand that Missy learns something that could help her triumph over her own pain: control.

A unique approach to the topic of self-mutilation, Rage is the story of a young woman who discovers her own power and refuses to be defeated by the world.

I really enjoyed the first book and was interested to see how Kessler would continue the series. This book is about Missy, a girl who is a cutter and has a lot of pent-up emotions that push her to cut. It's really quite a train-wreck for Missy – she's humiliated, made fun of, and a lot of other horrible things happen. And her reprieve happens to be taking on the role of War and realizing that she needs to learn control over herself in order to do what she need to do.

I'm not sure where this series is going and Kessler has left it open-ended as to whether the end of the world is actually inevitable or what will happen next. Definitely interested to see what book will be next. Well, wow, I just saw a lot of myself in Missy. If you had made Sue her older sister, that would've been me right there, no joke. I really related to her, so I think I just placed myself in the story and dug in. It was quite a ride. As I said above, I really related to Missy – if you have any teen hormones what-so-ever you can probably relate to this book.