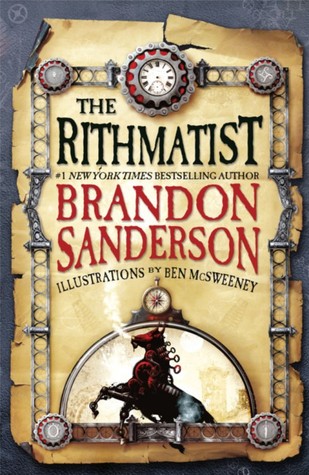 The Rithmatist by Brandon Sanderson
Series: Rithmatist #1
Published by Tor Teen on May 14th 2013
Pages: 374
Buy on Amazon
Goodreads

More than anything, Joel wants to be a Rithmatist. Chosen by the Master in a mysterious inception ceremony, Rithmatists have the power to infuse life into two-dimensional figures known as Chalklings. Rithmatists are humanity’s only defense against the Wild Chalklings — merciless creatures that leave mangled corpses in their wake. Having nearly overrun the territory of Nebrask, the Wild Chalklings now threaten all of the American Isles.

As the son of a lowly chalkmaker at Armedius Academy, Joel can only watch as Rithmatist students study the magical art that he would do anything to practice. Then students start disappearing — kidnapped from their rooms at night, leaving trails of blood. Assigned to help the professor who is investigating the crimes, Joel and his friend Melody find themselves on the trail of an unexpected discovery — one that will change Rithmatics — and their world — forever.

Bestselling author Brandon Sanderson brings his unique brand of epic storytelling to the teen audience with an engrossing tale of danger and suspense—the first of a series. With his trademark skills in world-building, Sanderson has created a magic system that is so inventive and detailed that that readers who appreciate games of strategy and tactics just may want to bring Rithmatics to life in our world.

The Rithmatist is the story of Joel, a boy who wishes nothing more than to be one of the priviledged Rithmatist students at his school. His deceased father was a chalkmaker at the school before he died and so Joel is allowed to attend classes while his mother works as a maidservant there. To become a Rithmatist, you must be chosen by Master in a very mysterious ceremony and then become endowed with the power to make Chalkings, creatures drawn with chalk that come to life. Rithmatists are taught this power so they can defend their world against Wild Chalkings, which are creatures that mangle those with the Rithmatist power and leave them dead.

When students start disappearing from his school, Joel is tasked to do research to help one of the professors figure out what is happening to them. Curious himself, Joel soon takes it on himself to investigate on his own as well, with only Melody to help. Melody is a Rithmatist student who needs remedial help in a lot of areas. She is sharp tongued and uninterested in being a Rithmatist, seeming to try and fail out so she can do something else with her life. Melody is bright in her own capacity and gives Joel more insight into what is happening on campus.

I felt for Joel from the start of the book, having such a strong desire to become a Rithmatist, but not having been selected at his time. It’s nice to see a character who is both brave and strong in intellect, knowing that some problems can be solved by knowledge. The magic in the world seems to be based in research and theory but still there is so much unknown about the Wild Chalkings, which comes into play later in the book. Melody gives you an equal viewpoint on the difficulties of being chosen, as it’s much more work than just having the magic to make Chalkings come to life.

The first half of the book really opened the world up, giving enough background on characters, while still moving forward with the story. The meld of mystery with fantasy is always appealing, especially when there is so much unknown to discover. The second half of the book really picks up with the action, as there are some very startling action, which puts into play how serious it is to be a Rithmatist. I also loved the twists and the realizations towards the end, leaving me wanting to read more. I’m hoping the series will bring Joel to the outside world as well, as it would be amazing to see the battlegrounds and the rest of Nebrask.

Final Verdict: The Rithmatist was an exciting and compelling read full of great world building, magic and action. The relationships also leant themselves to the story and I’m hoping for even more in the rest of the series.

3 responses to “Book Review: The Rithmatist”