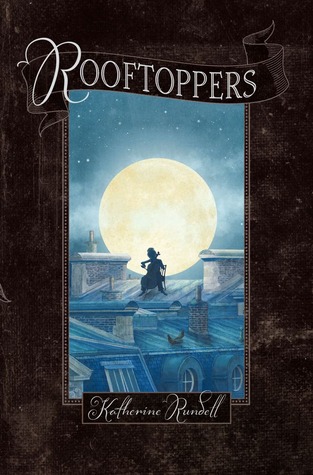 Everyone thinks that Sophie is an orphan. True, there were no other recorded female survivors from the shipwreck that left baby Sophie floating in the English Channel in a cello case, but Sophie remembers seeing her mother wave for help. Her guardian tells her it is almost impossible that her mother is still alive—but “almost impossible” means “still possible.” And you should never ignore a possible.

So when the Welfare Agency writes to her guardian, threatening to send Sophie to an orphanage, she takes matters into her own hands and flees to Paris to look for her mother, starting with the only clue she has— the address of the cello maker.

Evading the French authorities, she meets Matteo and his network of rooftoppers—urchins who live in the hidden spaces above the city. Together they scour the city in a search for Sophie’s mother—but can they find her before Sophie is caught and sent back to London? Or, more importantly, before she loses hope?

Phillip Pullman, author of the His Dark Materials series, calls Rooftoppers “the work of a writer with an utterly distinctive voice and a wild imagination.”

Ever since reading Oliver Twist, I have been a sucker for orphan tales set in Britain, which brought me to read Rooftoppers. Sophie is an orphan girl who was rescued from the sea by Charles, a man of many words but not thought suitable to raise Sophie, especially as she turns twelve. Having been found floating in a shipwreck in a cello case, Sophie recalls memories she should have been too young to remember. Her mother was a cello player on the ship, although there was no record of women cello players at all.

Sophie is happy living with Charles, even though haunted by the memory of her mother, who she swears is still alive. When the Welfare Agency sends a note that she will be removed from Charles' home to live in an orphanage, Charles decides it is time to search out the long lost mother. The clue in her cello box leads them to Paris, where they are eventually discovered, causing her guardian telling her to stay indoors and out of sight. Her room is in the attic and she finds a window that opens to the roof.

Even more curiously, there is a boy that says he lives on the rooftops and that she ought to stay off them. But this boy only sparks her curiosity and she finds herself escaping at night to become more familiar with the rooftops of Paris. Matteo may be able to help her find her mother, as there can be music often heard from the rooftops. But they may have to walk in dangerous territory to get closer to the music, which means facing some ruthless rooftop boys in turn.

I simply loved the strength and oddities of Sophie's character. She herself learns to play the cello as a young girl but also is brought up on Charles' quirks, his weird sayings and ways of teaching Sophie about life. Matteo is a more jaded character who has adapted to a life he enjoys above the city of Paris. There are even more strange characters, like the sisters who live in trees and help Matteo and Sophie towards the end of the novel.

I love the historical setting and the push Sophie's character made against society's rule on what women should and should not do. The musical aspect was also dear to me, as I come from a musical family and even have a sister who plays the cello. I felt all the elements in this novel sunk together to pull you into the story and keep you reading.

Final Verdict: Possibly the best novel I have read in a while that combines everything I love into one book – adventure, music, oddities, and a setting and time period that I adore.