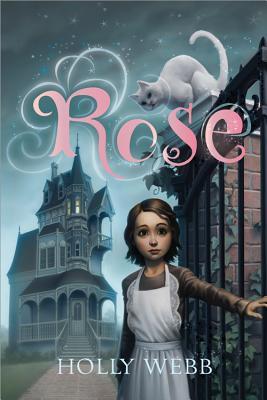 Rose isn't like the other orphans at St Bridget's Home for Abandoned Girls. Instead of dreaming of getting adopted by loving, wealthy parents, Rose wants to get a job and be independent. She doesn't need anyone but herself. She finds her escape working as a maid for Mr. Fountain, an alchemist. Unable to ignore the magic that flows throughout the grand residence, Rose realizes that just maybe; she might have a little bit of magic in her too. This new series featuring magicians, witches, talking cats, mist-monsters, and friendships will have young readers in a trance!

Rose had everything I could ever want in a book. Magic, orphans and a Victorian England setting made it a novel I was looking forward to. When Rose is given the opportunity to leave the all-girl orphanage to become a maid for an alchemist, she jumps at it. What she doesn't know is that she has her own magic inside of her and it will blossom as she spends more time in the house. The alchemist's apprentice is at first rude and abrasive to Rose, but slowly they become more friendly due to the sudden disappearance of children all over London.

Together, Rose and Freddie will try to solve the mystery with the help of the talking cat Gus and Rose's own magic. I really enjoyed reading this book, I often found myself relating the book to some of my favorite stories and characters. Rose is a bit unsure of herself and having magic is a new concept, one she is not sure what to do with. Possibly my favorite character was Gus the talking cat, who seemed to be taken straight from Cinderella, only given a much more accommodating demeanor.

The level of danger in the book really was shocking and I love a truly evil, selfish bad guy and this one definitely delivered just that. I love the way that magic plays into the story, not only with Rose discovering her own skills, but the manipulation and uses throughout the book.

Final Verdict: Rose is a book you will not want to miss. I loved the adventure mixed with magic and thought both those elements fit beautifully with the Victorian England setting.

One response to “Book Review: Rose”