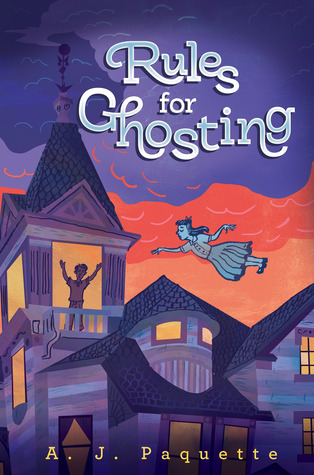 Twelve-year-old Dahlia has always lived at Silverton Manor-having spent fifty years as its resident ghost. When Oliver Day and his family show up as house-sitters the day Mrs. Tibbs, a Liberator sent by the Spectral Investigative Council, arrives to teach Dahlia the proper rules for ghosting, Dahlia can't wait to make new friends. But the unscrupulous ghost hunter, Rank Wiley, and the crooked town councilman, Jock Rutabartle, plan to rid Silverton Manor of its ghosts and sell it to the highest bidder. With her home and friendships at stake Dahlia may have to break the rules of ghosting as quickly as she learns them to solve the mystery of her death and save the manor. Equal parts charming and eerie, this ghostly caper hits all the right notes for the middle-grade audience.

Rules for Ghosting is told from two point of views. Oliver is a boy whose family's job is to move into and fix up houses before they are sold. All he wants, however, is a real home and he thinks Silverton Manor will be that home the first day they move in. Dahlia is a girl who has ghosted the manor for decades and just recently was discovered to be in need of crossing over by the Spectral Investigative Council, who sends Mrs. Tibbs to help her find her source. Once the source is found, she will be able to move on to the other side.

Beyond that, is the problem of a ghost hunter showing up, pretending to be a live-in handy man. Oliver catches on that their is something fishy about Rank Wiley, but no one will listen to him. With the help of his sister, Oliver discovers Dahlia's dilemma and the danger she faces from Rank Wiley. When Mrs. Tibbs is taken by Wiley, they face an even harder dilemma as the race to find her source becomes even more desperate.

Rules for Ghosting was a surprise read for me. I thought it would be a lot more cutesy, but there were some very intense moments that had me on the edge of my seat. I felt it had a lot of great plot twists and characters that make it stand out from the usual haunted house story.

Final Verdict: Rules for Ghosting was a stand out ghost story, some parts were quite scary but with added humor and great characters I felt it really pulled together as a novel anyone could enjoy.