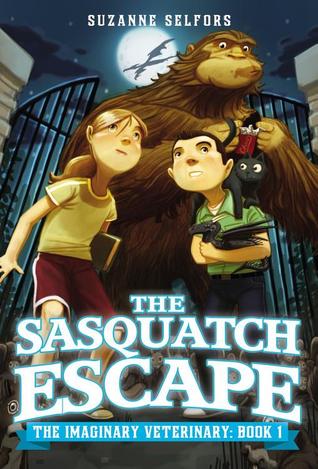 When Ben Silverstein is sent to the rundown town of Buttonville to spend the summer with his grandfather, he's certain it will be the most boring vacation ever. That is, until his grandfather's cat brings home what looks like . . . a baby dragon?

Amazed, Ben enlists the help of Pearl Petal, a local girl with an eye for adventure. They take the wounded dragon to the only veterinarian's office in town -- Dr. Woo's Worm Hospital. But as Ben and Pearl discover once they are inside, Dr. Woo's isn't a worm hospital at all -- it's actually a secret hospital for imaginary creatures.

After Ben accidentally leaves the hospital's front door unlocked, a rather large, rather stinky, and very hairy beast escapes into Buttonville. Ben and Pearl are tasked with retrieving the runaway creature, and what started out as an ordinary summer becomes the story of a lifetime.

Suzanne Selfors delivers a wild journey filled with mythical creatures and zany adventures that are anything but imaginary.

Ben has been sent to live with his grandfather for the summer while his parents work out their marital problems. As much as Ben loves his grandfather, he lives in a smalltown with not much to do. When Ben sees what looks to be a dragon flying over the town, his stay becomes a lot more interesting. Pearl is a girl who also saw the dragon and together they find themselves an injured dragon hatchling. The only place to take the animal is a new, mysterious looking Worm Hospital and is more than it seems.

Ben and Pearl make a great team as they discover more of the unhidden creatures at the hospital, including a sasquatch that has recently escaped thanks to Ben leaving a door open. Together, they must find the sasquatch and return it to the hospital. I love the budding relationship between Ben and Pearl as they embark on an adventure they never thought possible.

The illustrations in the book are cute and well drawn and really add to the story. I love the concept of this series and it has a lot that can follow up with all of the different mythical creatures. I like that Selfors chose a different type of creature in the sasquatch, one that we don't see a lot in middle grade fantasy.

Final Verdict: A fun and quick read, The Sasquatch Escape is the first book in a series that will entertain young readers.