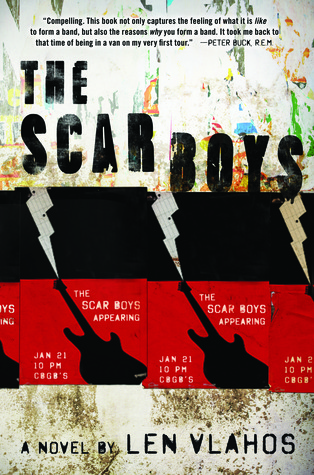 A severely burned teenager. A guitar. Punk rock. The chords of a rock 'n' roll road trip in a coming-of-age novel that is a must-read story about finding your place in the world...even if you carry scars inside and out.

In attempting to describe himself in his college application essay--help us to become acquainted with you beyond your courses, grades, and test scores--Harbinger (Harry) Jones goes way beyond the 250-word limit and gives a full account of his life.

The first defining moment: the day the neighborhood goons tied him to a tree during a lightning storm when he was 8 years old, and the tree was struck and caught fire. Harry was badly burned and has had to live with the physical and emotional scars, reactions from strangers, bullying, and loneliness that instantly became his everyday reality.

The second defining moment: the day in 8th grade when the handsome, charismatic Johnny rescued him from the bullies and then made the startling suggestion that they start a band together. Harry discovered that playing music transported him out of his nightmare of a world, and he finally had something that compelled people to look beyond his physical appearance. Harry's description of his life in his essay is both humorous and heart-wrenching. He had a steeper road to climb than the average kid, but he ends up learning something about personal power, friendship, first love, and how to fit in the world. While he's looking back at the moments that have shaped his life, most of this story takes place while Harry is in high school and the summer after he graduates.

The Scar Boys is about a boy named Harry, short for Harbringer, who through an act of bullying and nature, ends up being tied to a tree when lightning strikes it. The burns that result leave him scarred for the rest of his life and seemingly friendless until popular Johnny becomes his friend in 8th grade. When Johnny one day suggests they should start a band, it suddenly becomes a reality.

Told from Harry's perspective, The Scar Boys is written for an admittance essay to college. Harry's personality shines through from the beginning as he explains that the word limit will not suffice to tell his story. At first I was a bit put off by the random SAT words, followed by parentheses saying something slightly sarcastic about using such big words. Then, I hit a stride and I felt like I was in Harry's brain, a teenager who is one in himself with a sharp wit and big words in his pocket. Harry isn't perfect and he tells his story with zest and insight, revealing more than just what happened, but why it happened the way it did.

Even perfect Johnny in this book is unraveled and revealed by the end as a teenager who still is battling with himself inside. Harry has had to deal with adversity since he was scarred and throughout the book he starts to grow up, to find himself through music and through relationships. I liked the edginess of the book, including all the things associated with punk rock bands – girls, drugs and music. I was a bit of a punk rock girl and attempted to start a band in high school, but never made it past 3 drumset lessons.

The best part of this book was the relationship between Johnny and Harry – not for it's wonderful fluffy feelings, no – for it's raw neediness, for the mutual using of each other, yet something more. Relationships are not all teddy bears and rainbows, they take work, tears and possible break ups. I love the focus on the friendship of these two boys throughout the book. Yeah, there's a somewhat love interest, but it only amplifies the book.

Final Verdict: I think anyone could pick up The Scar Boys and love it, whether they grew up in the era or not. I think the struggles Johnny goes through is universally understood through the eyes of all readers.