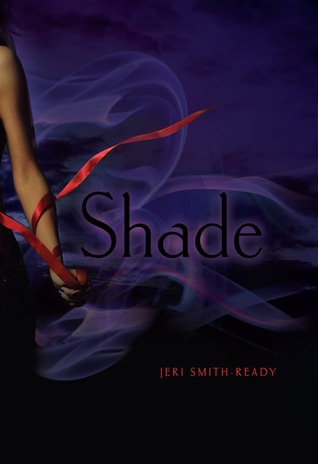 Best. Birthday. Ever. At least, it was supposed to be. With Logan's band playing a critical gig and Aura's plans for an intimate after-party, Aura knows it will be the most memorable night of her boyfriend's life. She never thought it would be his last.

Like everyone born after the Shift, Aura can see and hear ghosts. This mysterious ability has always been annoying, and Aura had wanted nothing more than to figure out why the Shift happened so she can undo it. But not with Logan's violet-hued spirit still hanging around. Because dead Logan is almost as real as ever. Almost.

It doesn't help that Aura's new friend Zachary is so understanding--and so very alive. His support means more to Aura than she cares to admit.

As Aura's relationships with the dead and the living grow ever complicated, so do her feelings for Logan and Zachary. Each holds a piece of Aura's heart...and clues to the secret of the Shift.

Is it bad to say that I wasn't sad to see her boyfriend die? My head was going "Don't do it – don't have sex!!" and then.. well – read the book. Bad way to start off this review – oh well. I loved the world build-up and it's absolutely fascinating and I hope to learn more with the next novel.. I'm assuming there's a next one… I didn't quite check. I definitely think the addition of this government group becoming interested in Aura really pulls the plot into a different theme then just – how do you grieve your dead boyfriend when his ghost is still hanging out? Which was great. I am wary of books that have romance guide the main plot versus an actual outside force outside of the relationship.

There was a lot of questions that came up as I read this book – about Aura's interest in a Stonehenge, what her mother was doing there before she was born.. really just what is going on – what happened to cause the world to be like this. I love the intrigue and mystery and I really can't wait to find out more.

Aura is quite an interesting girl. She seems to level out Logan's crazy outgoing behavior from the start and I just really thought – why are they together? It was hard to see what really connected them, especially with the introduction of a new male character – equally as good-looking and one I found a lot more to my tastes. Zachary has a lot in common with Aura and when he hopped on the scene I zeroed in on how much I thought they should be an item. But, that's my opinion. They end up working on projects together and I really can't imagine how Aura will move on if Logan remains a ghost for much longer. I'll leave it at that. I really loved the characters – they definitely left an impression on you – good or bad.

Final Verdict: I think anyone who has been torn between a friend and a boyfriend/girlfriend can relate to this. Or anyone who has experienced grief. Also, I think fans of paranormal romance will really dig this as it's quite different from what we've seen up to now in the genre. I know I really enjoyed it.